Pierre Soulages
Une Expérience au présent
06 May - 12 June, 2021
Opera Gallery Paris is pleased to present "Une Expérience au Présent", a solo presentation of works by Pierre Soulages. "Outrenoir" (Beyond black) paintings are gathered around an outstanding work from 1974 that seems to accurately foresee the latter series, thus revealing to what extent Soulages is in fact a painter of light. Standing in front of an Outrenoir painting is indeed accepting a certain pace, a dynamic, a mobility brought by the incidence of lighting or by a change of perspective, and accepting a path that leads to a solitary and unavoidable inner experience. 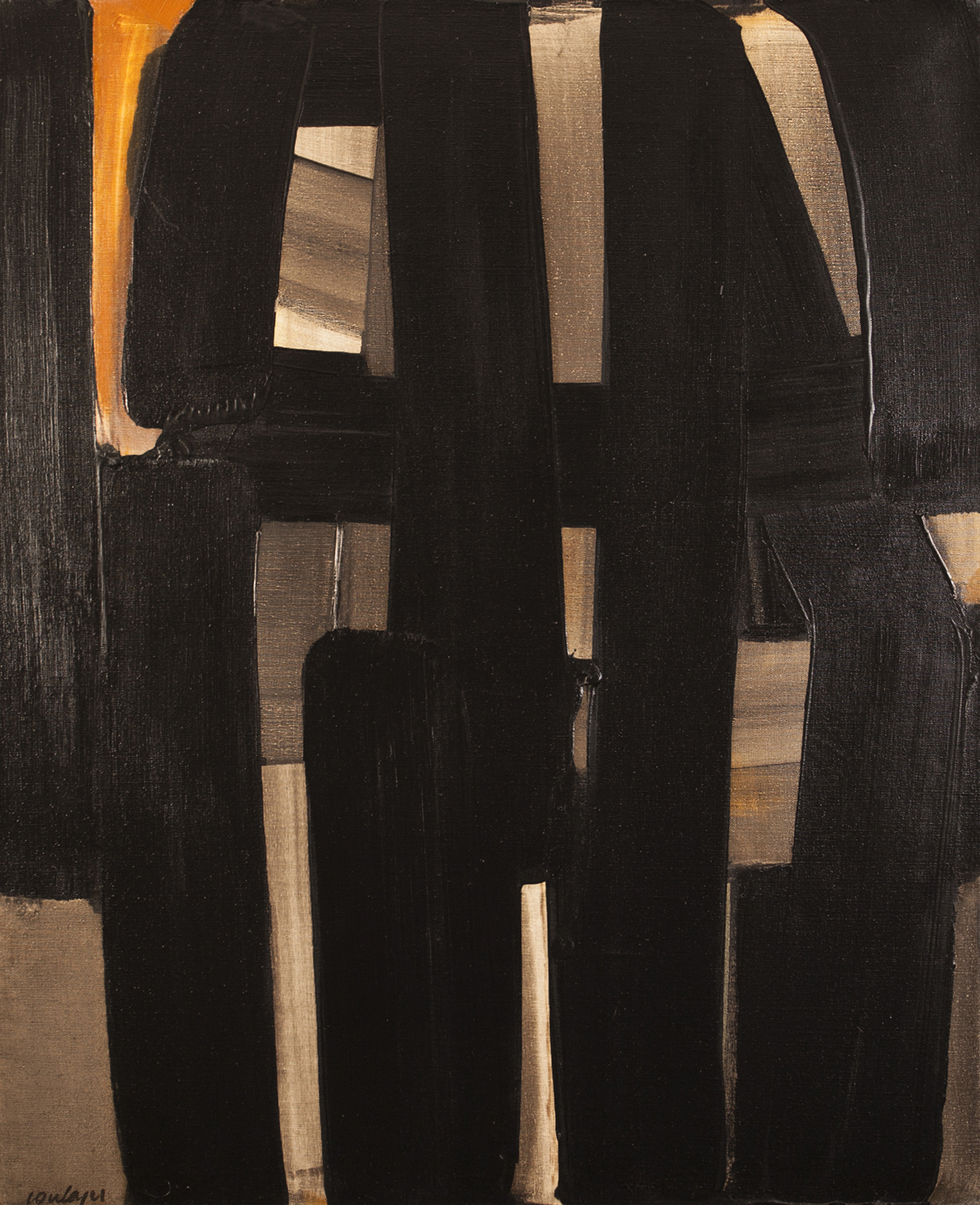 Enquire
In January 1974, Soulages went back to painting on canvas after two years devoted to perfecting etching and lithography techniques. Peinture 92 x 73 cm, 3 avril, 1974 stands as a characteristic work from the transition period that led him to the famous Outrenoirs in 1979. This painting indeed is one of the first pieces the artist painted on canvas following his long break, which was undoubtedly necessary for a painter who forbids himself repetition. From 1974 to 1978, he revisited his work from the previous decade while introducing novelty to it, mainly producing small and medium-sized formats. He notably retained the subtle game of layered materials and colours from his previous etchings. This new technique created a feeling of depth on the canvas thanks to an arrangement of thick, darker hues on flowing light tones, just like he had previously done it with his walnut stain works or inks on paper. 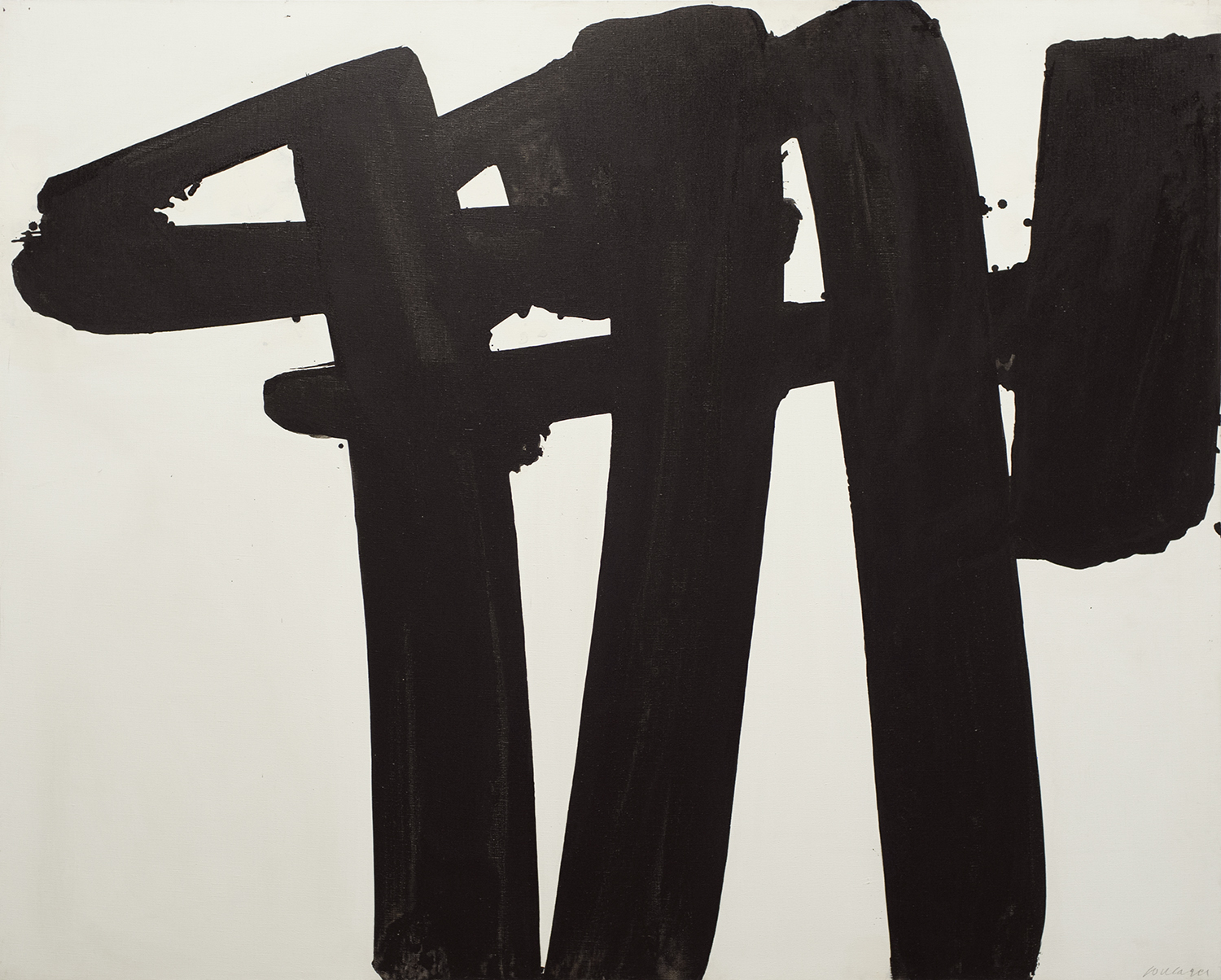 Enquire
After his first solo exhibition at the Musée National d'Art Moderne in 1967, Pierre Soulages entered a more radical phase of his creation. Colours disappeared from his 1968 to 1972 paintings and gave way to the ultimate chromatic contrast of black and white, pivotal in the artist's oeuvre. Soulages created a series of about thirty, often horizontal pieces, all equally based on a dialogue between substance and form.
In Peinture 130 x 162 cm, 28 juillet 1971, the white background dominates a composition crossed over laterally by the black colour. A pattern of curved jambs is repeated three times over from left to right, and ends with a wide, vertical solid back against the upper right side of the canvas. The black strokes feature irregular outlines and seem to want out of the picture. They provide rhythm and allow the observer's gaze to follow the artist's gesture. The discipline contained in these ordered signs, much like a writing and the simplicity of a shape stripped bare illustrate a return to a certain asceticism. 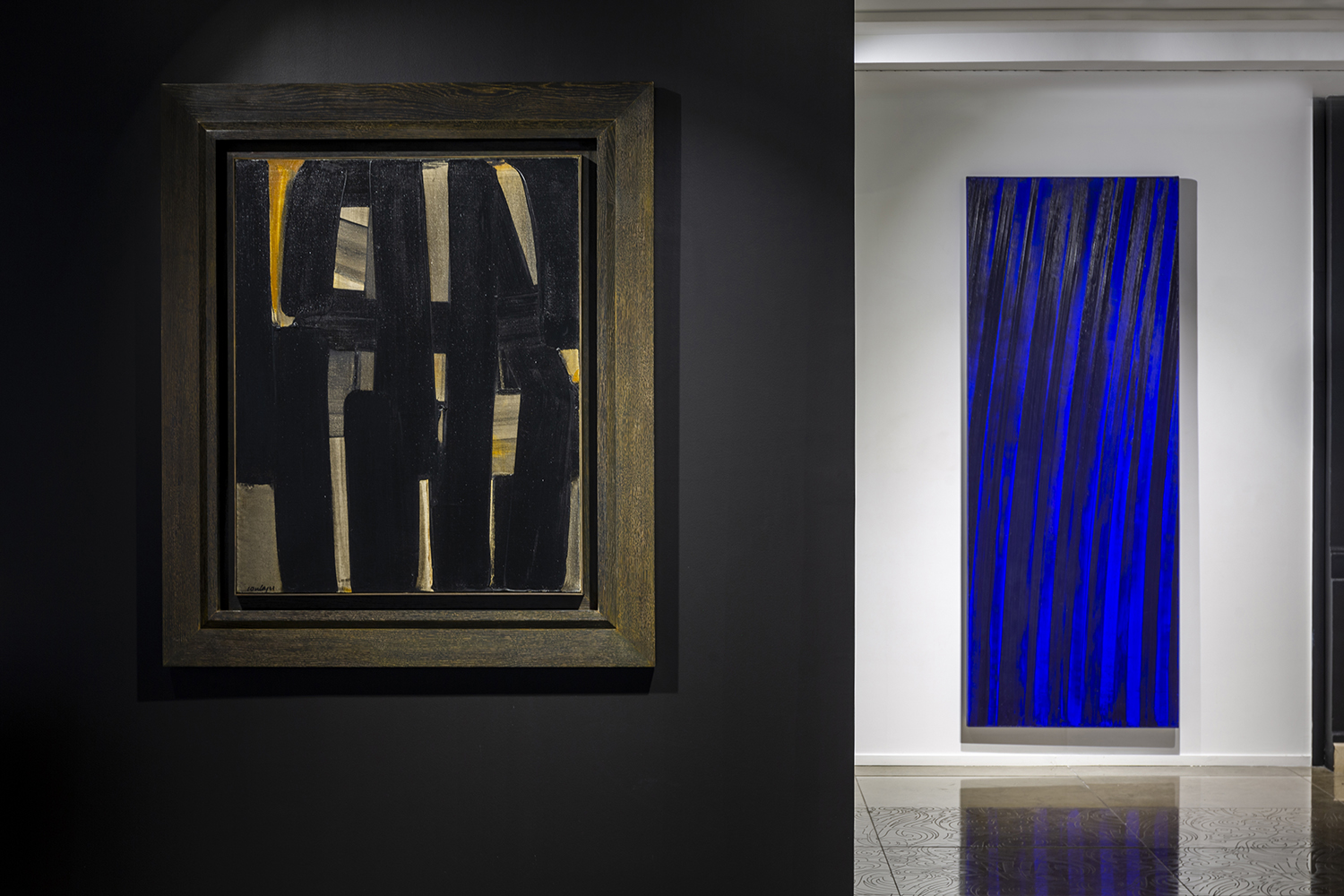 "As for the blue that is sometimes found in my paintings, my desire for it was accidental: it was when I thought I saw a real blue in a painting – that had yet been painted only using black – with reflections of an intense blue, that I felt like introducing a blue coming from the pigments of the paint."
Pauli, Les Couleurs du noir : Entretien avec Pierre Soulages, 1990. 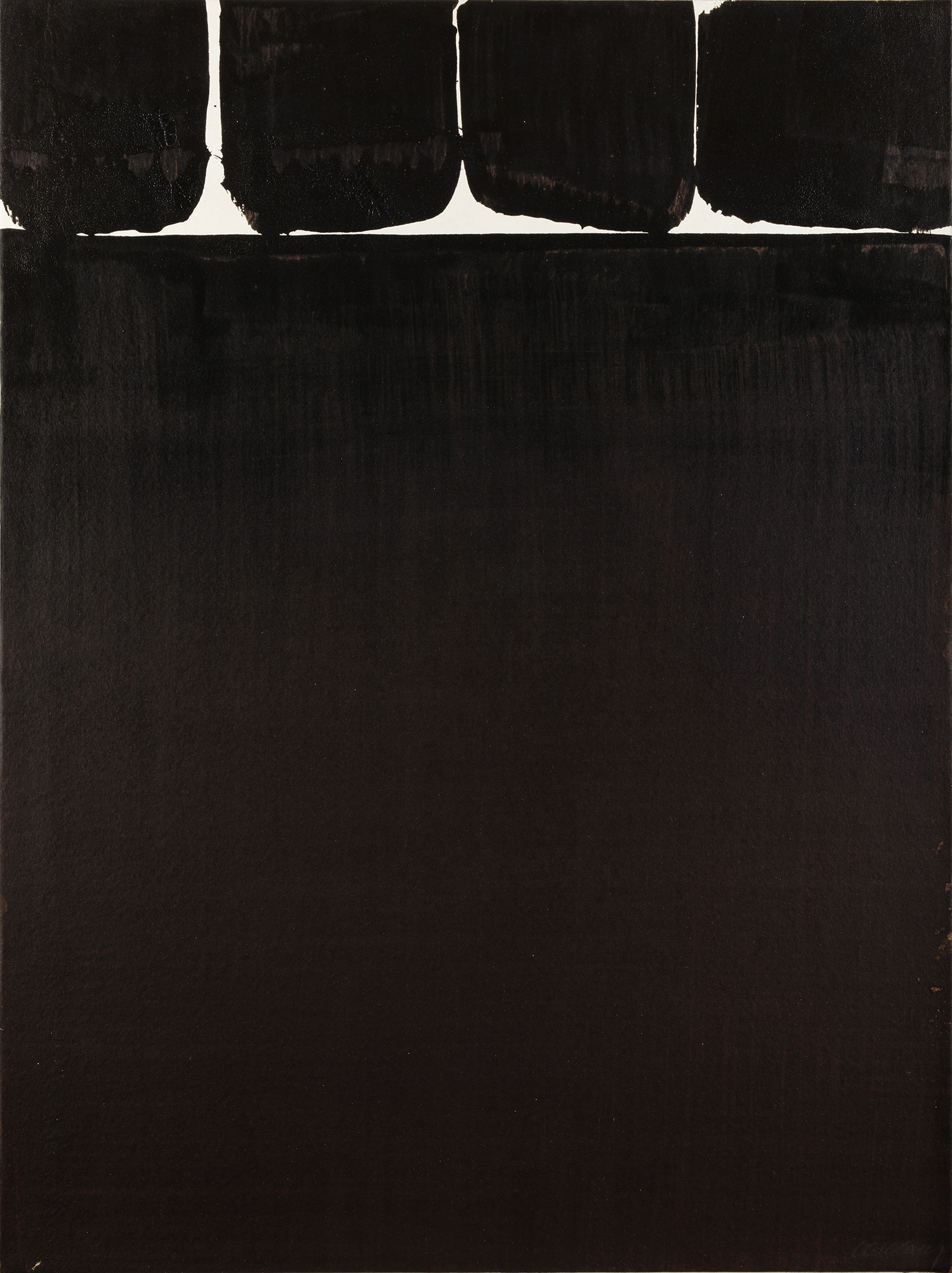 Enquire
From 1947 on, Pierre Soulages started using walnut stain in his works on paper. In 1997 and 1998, he went back to this medium which he had set it aside after his discovery of Outrenoir in 1979. A cheap and common material used by cabinetmakers and carpenters to dye wood, walnut stain was appreciated by Pierre Soulages for its warm value as well as for its fluidity that allows for more spontaneity in the execution. Directly applied on the paper's white background, dark-toned walnut stain almost covers the whole surface of the painting. Only four large brushstrokes applied off-frame reveal some little untouched white areas.

With its abrupt and almost hieratic form, Brou de noix, 76,5 x 56,5 cm 1998 offers a silent light thanks to the delicate variations coming from the tonalities of the ink. 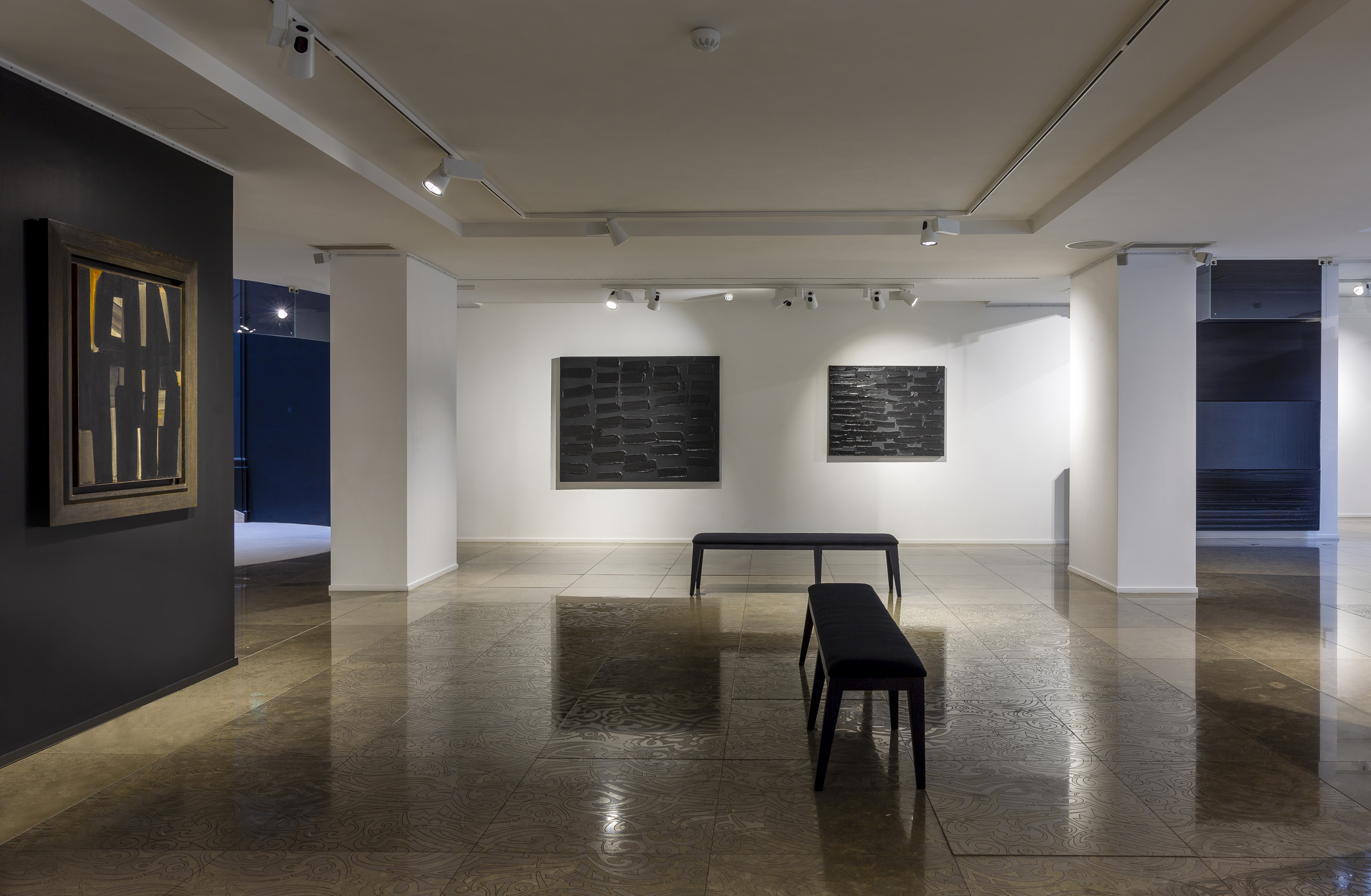 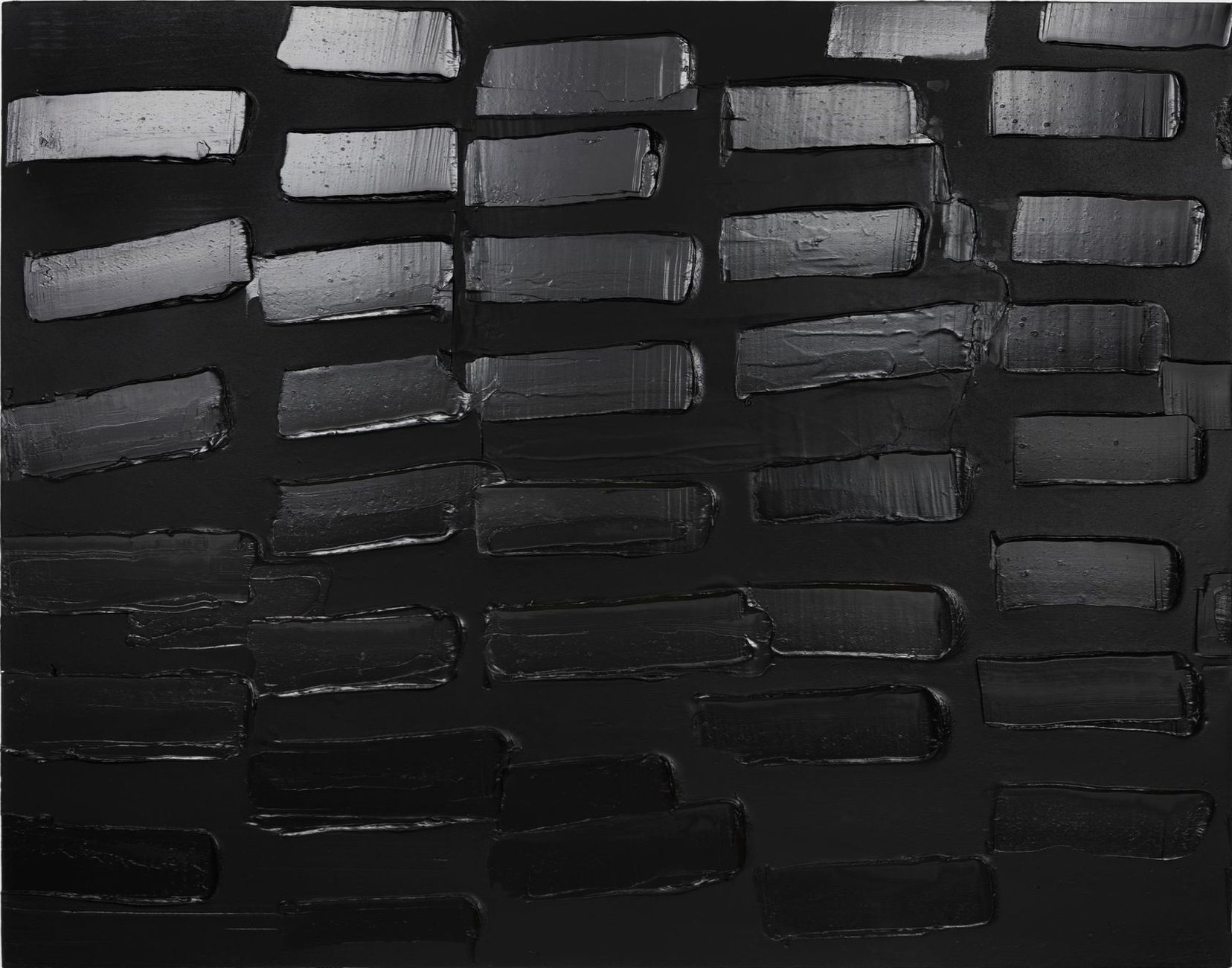 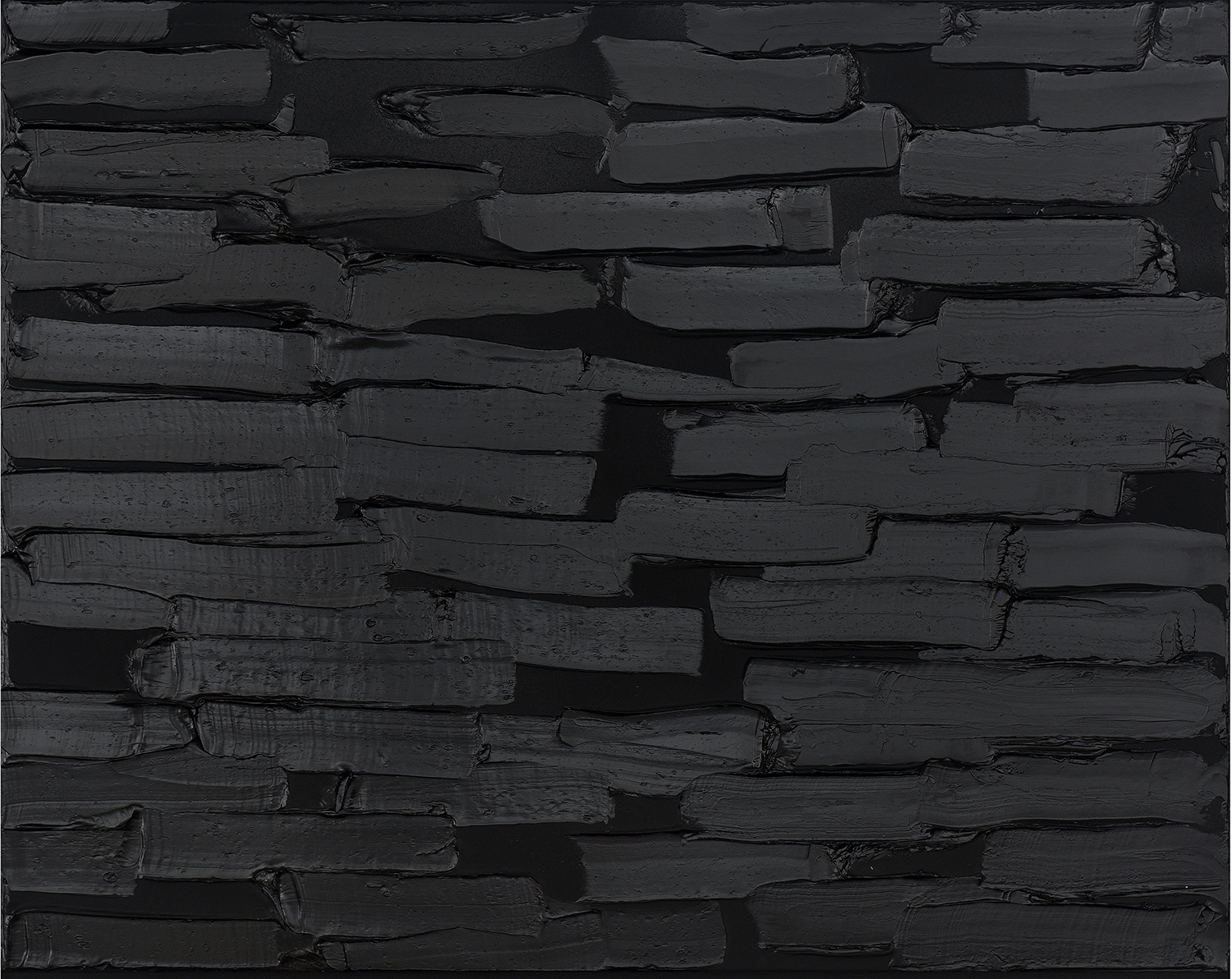 Enquire
"What words cannot grasp, what lies in the most obscure and secret part of painting, is what I find interesting."
Pierre Soulages, in conversation with Léone Granville, Ed. Plaisir de France, May 1972, p. 379 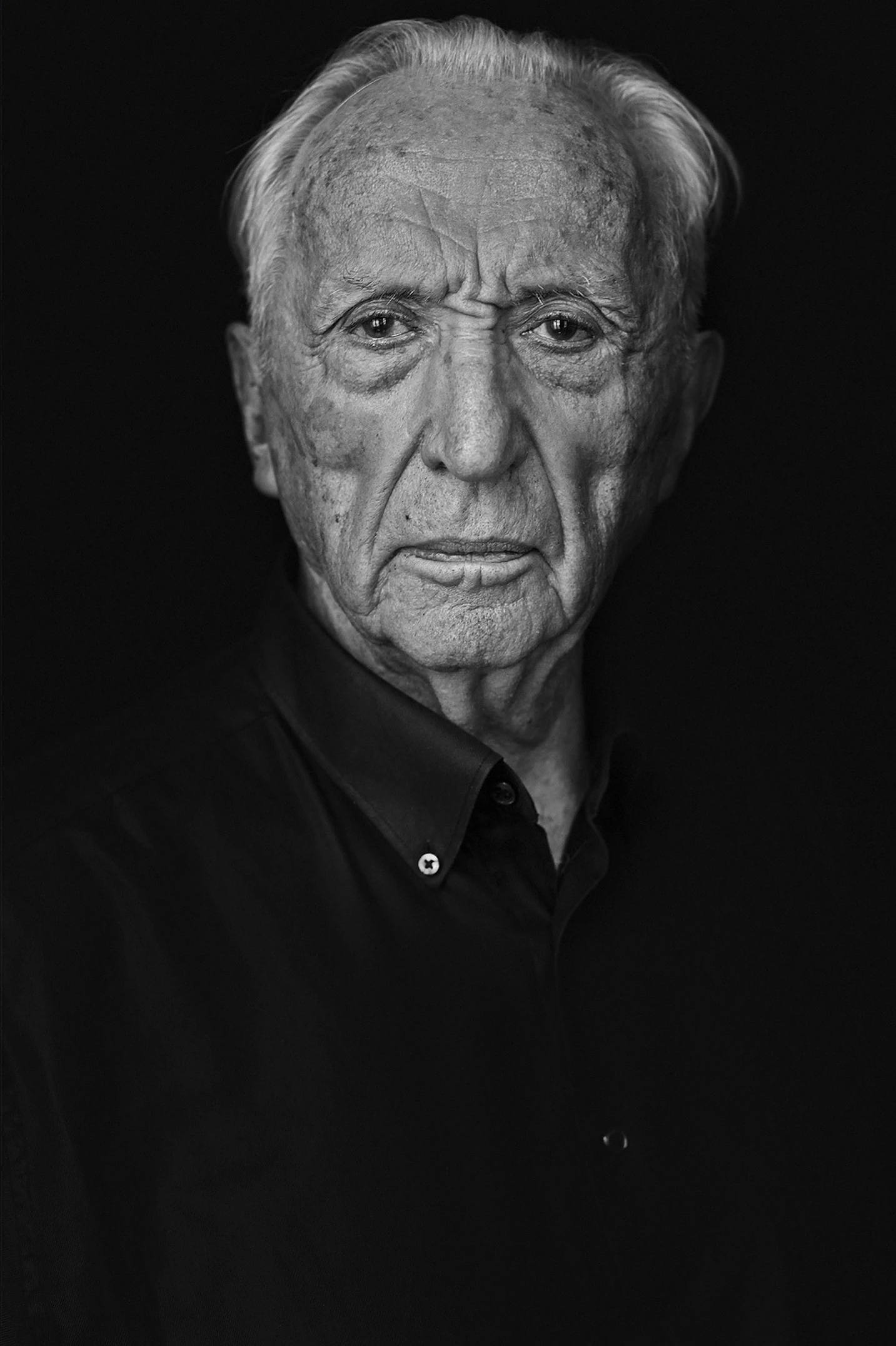 Since 2004, Pierre Soulages has exclusively used a mix of different acrylic resins that allow for more important impasto, various consistencies and quicker drying times. Peinture 324 x 181 cm, 12 février 2005 is a polyptych composed of four stacked canvases covered with smooth parts as well as parts exclusively striated with a brush. That work echoes the Outrenoirs from 1996 -1997 where unified surface prevails.
From 1967 on, working on polyptychs allowed the artist to consistently extend the dimensions of his pieces while interrupting the continuity of the painterly surface. He thus forced the observer to step back as to enlarge their visual field and he inserted additional lines of force in the composition. The fact those four paintings have different formats accentuates a certain feeling of rhythm triggered by the opposition between smooth or ridged textures and matt or glossy ones. 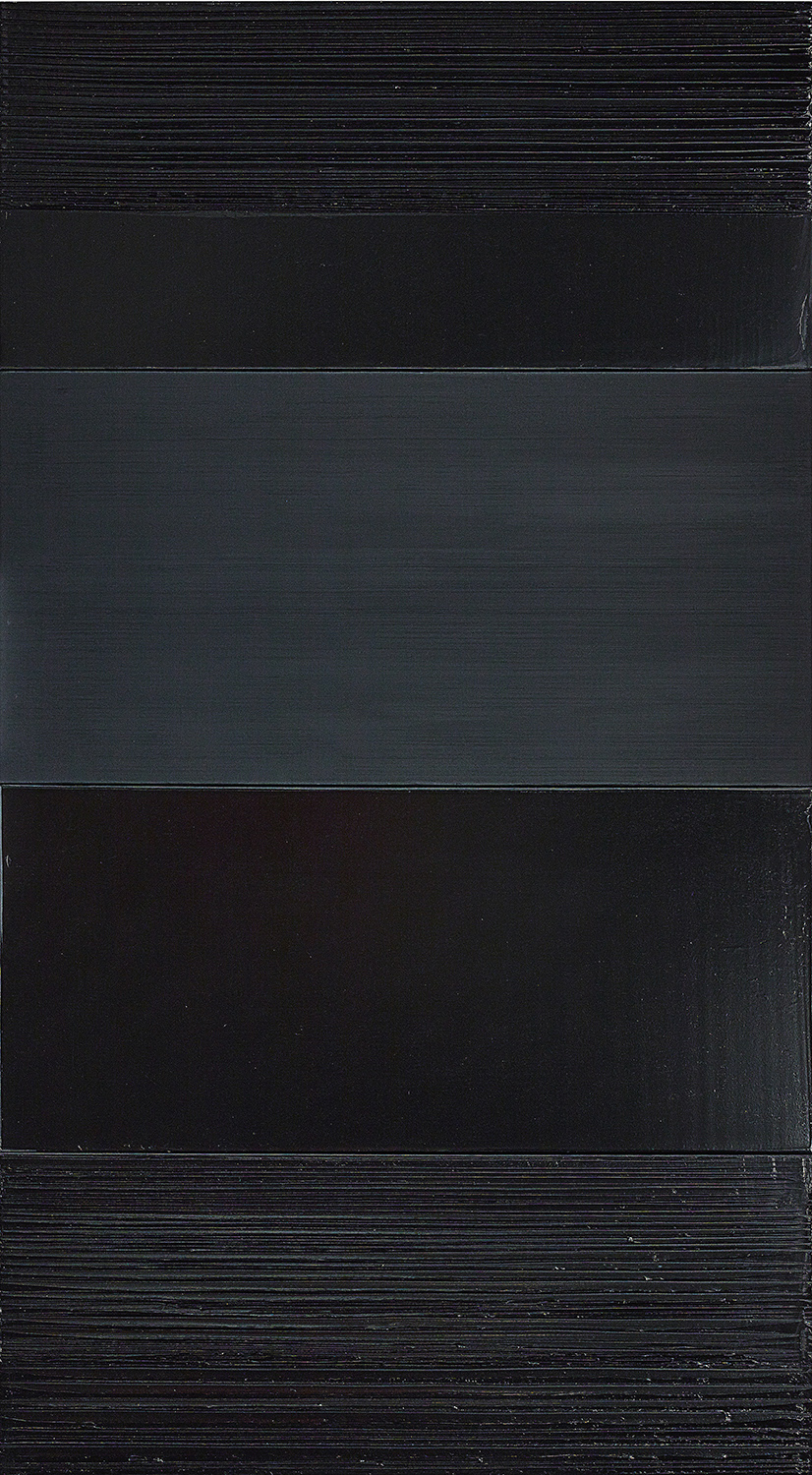 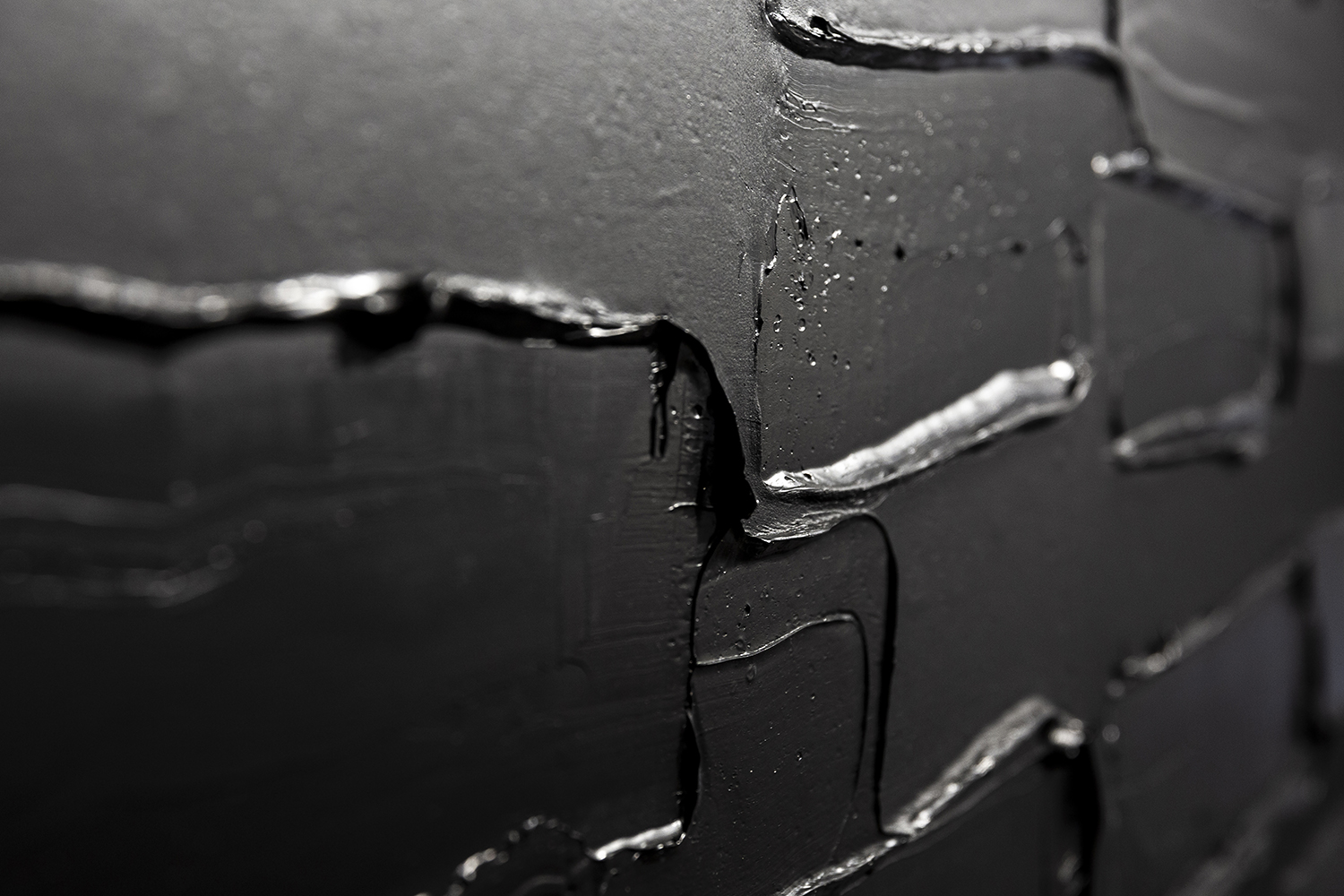