Concomitantly to the Alex Katz career retrospective taking place at the Solomon R. Guggenheim Museum in New York until February 20, 2023, Opera Gallery is pleased to present an online exhibition paying tribute to this prominent painter of modern life.


Emerging in the New York art scene of the 1950s, which was dominated by the titans of Abstract Expressionism, Katz brazenly forged his own path, eschewing the passion and primacy of gesture inherent to abstraction to craft flat, polished scenes, awash in fields of color that capture the sensation of lived experience. By reducing perspective, eliminating extraneous detail and sharpening contours, he has created a definitive and idiosyncratic method of painting.

I like to make an image that is so simple you can't avoid it and so complicated you can't figure it out.

In terms of composition, Katz paintings have deceptive appearance of simplicity and modesty. But, as with most great painters, there is a delicate visual balance achieved in his work. During the 1950s, the artist began to use monochrome backgrounds in his work and also began to focus on portraiture, creating large-scale canvases with a strong focus on line and brushstroke. 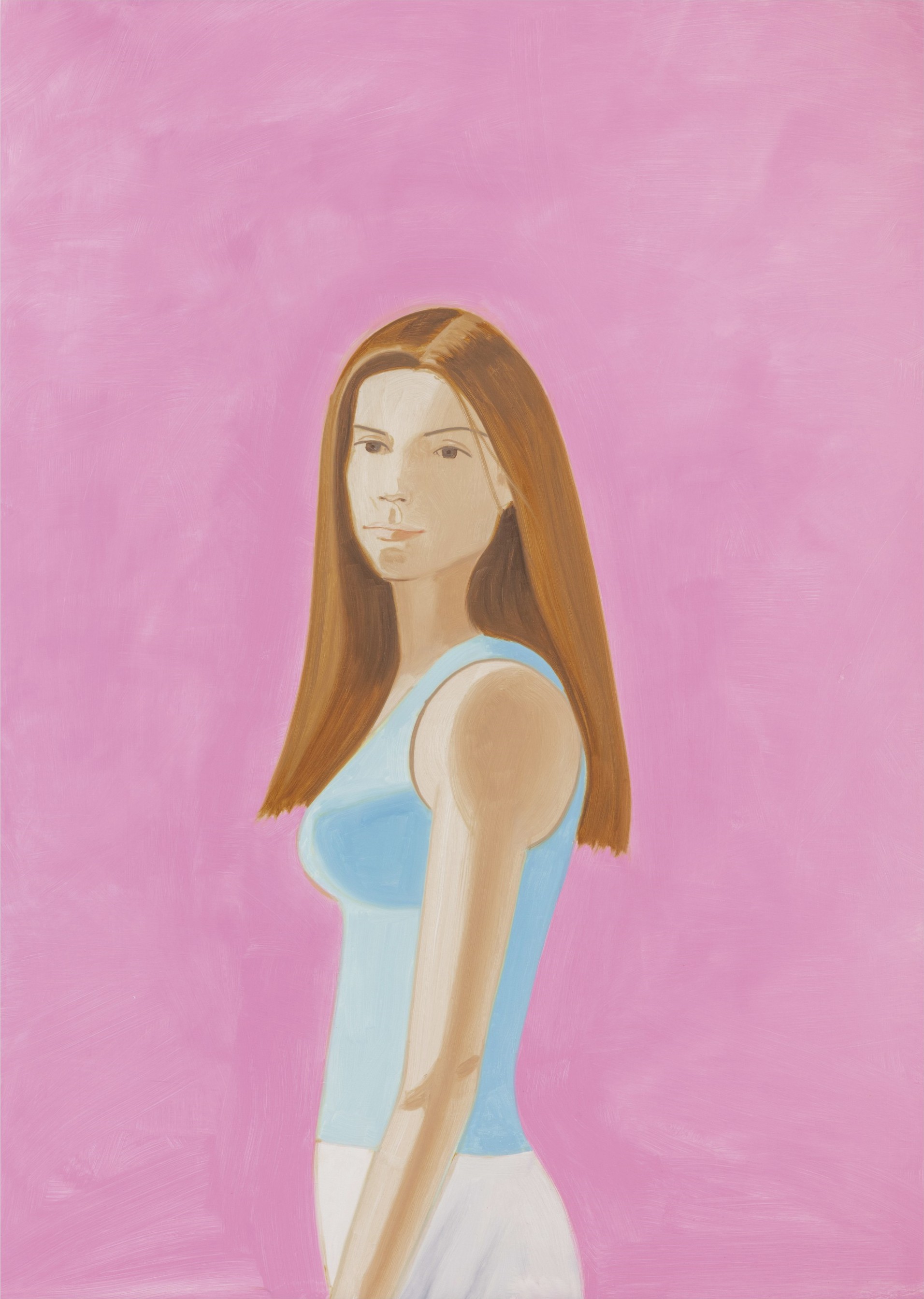 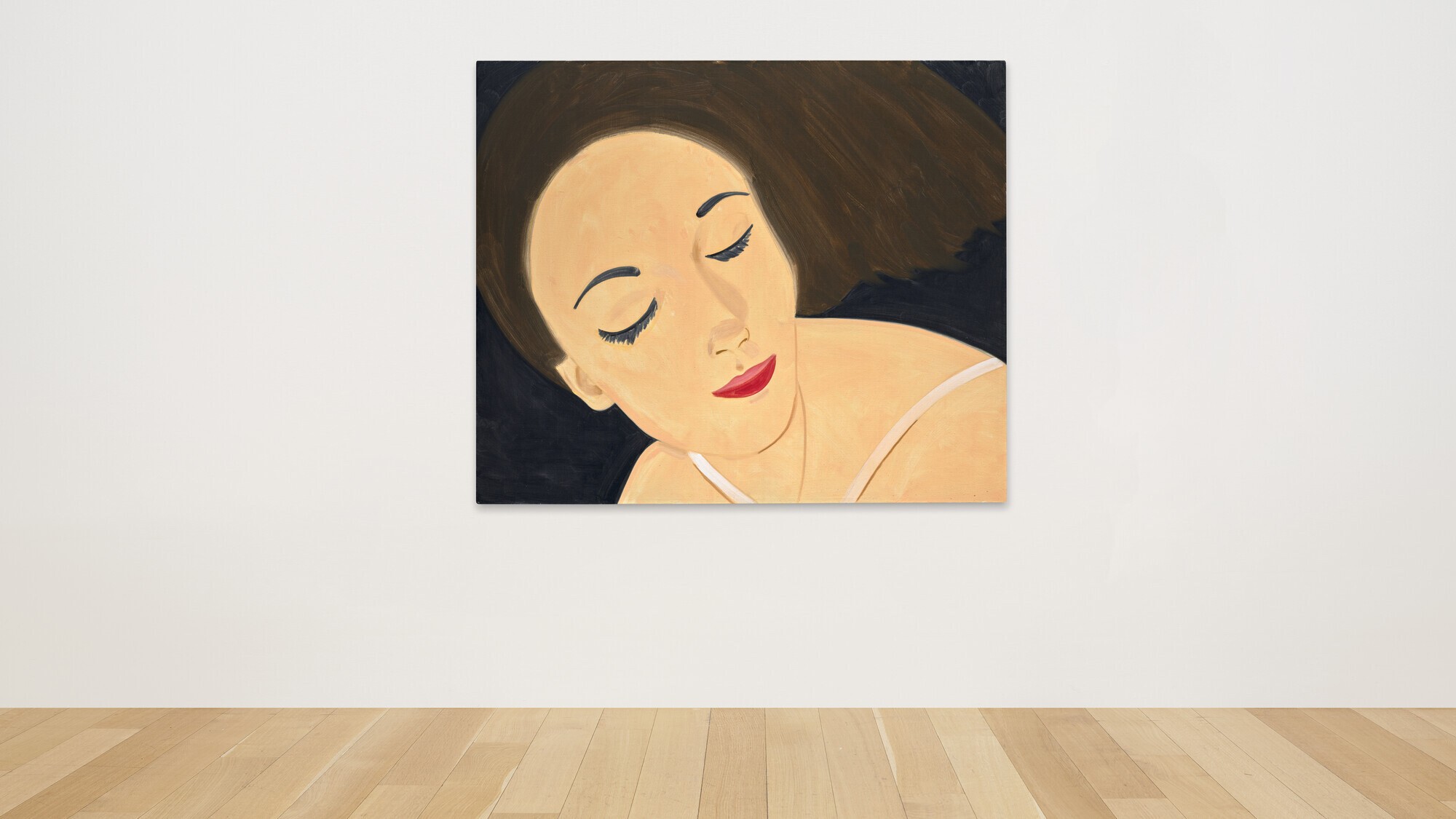 The work Laura 11 is a portrait of Laura Halzack, prima ballerina with the Paul Taylor Dance Company in New York City. Laura, like many of Katz's portrait subjects, is presented without context. No narrative is provided other than her first name. This lack of narrative reinforces the enigmatic qualities of the dancer and allows Laura to exist in and for herself. 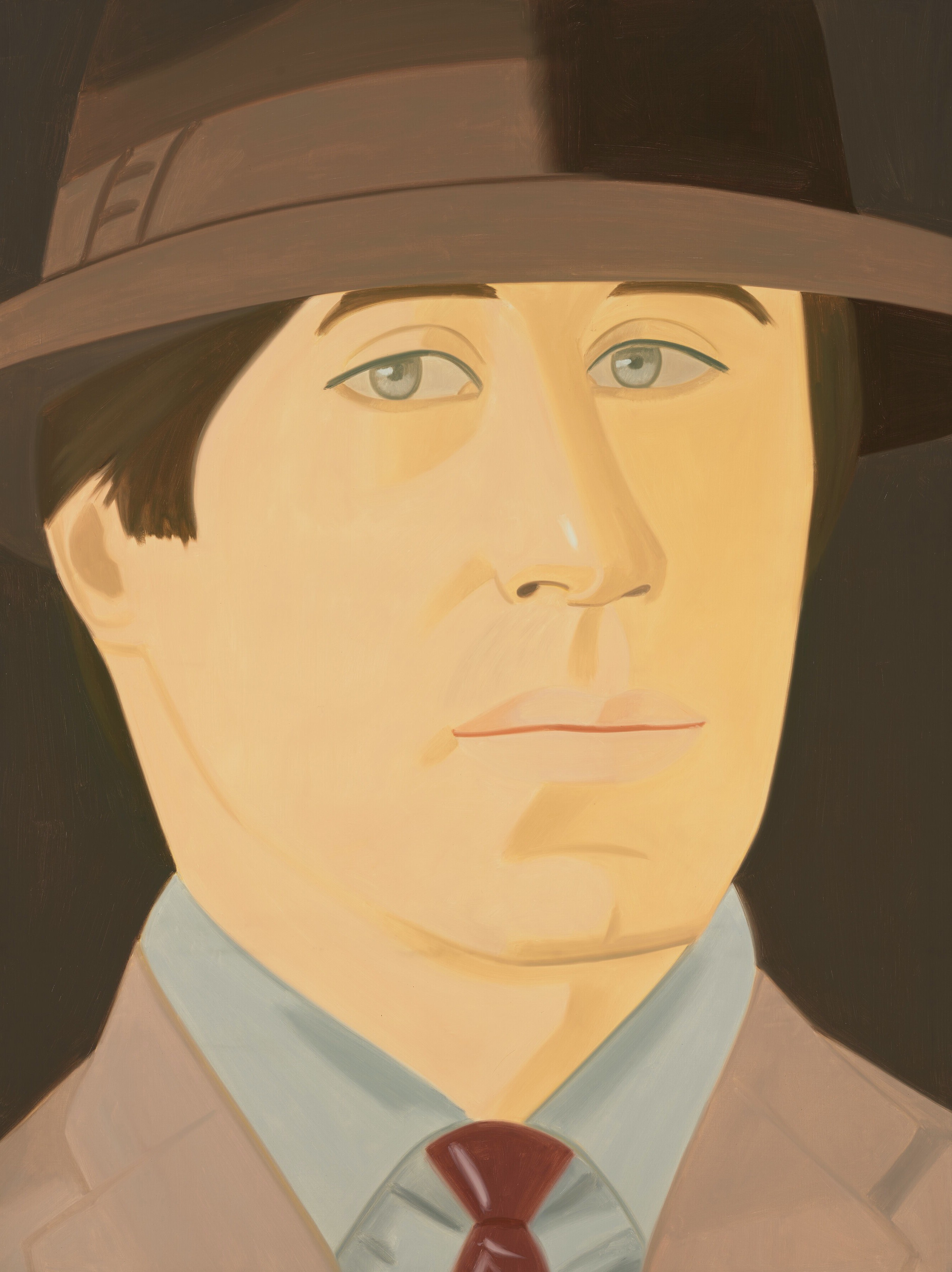 Alex Katz's portraits and landscapes quietly defy their two-dimensionality. The artist paints «wet on wet», so his fluid brushstrokes blend together on the canvas, evoking a lustrous finish. 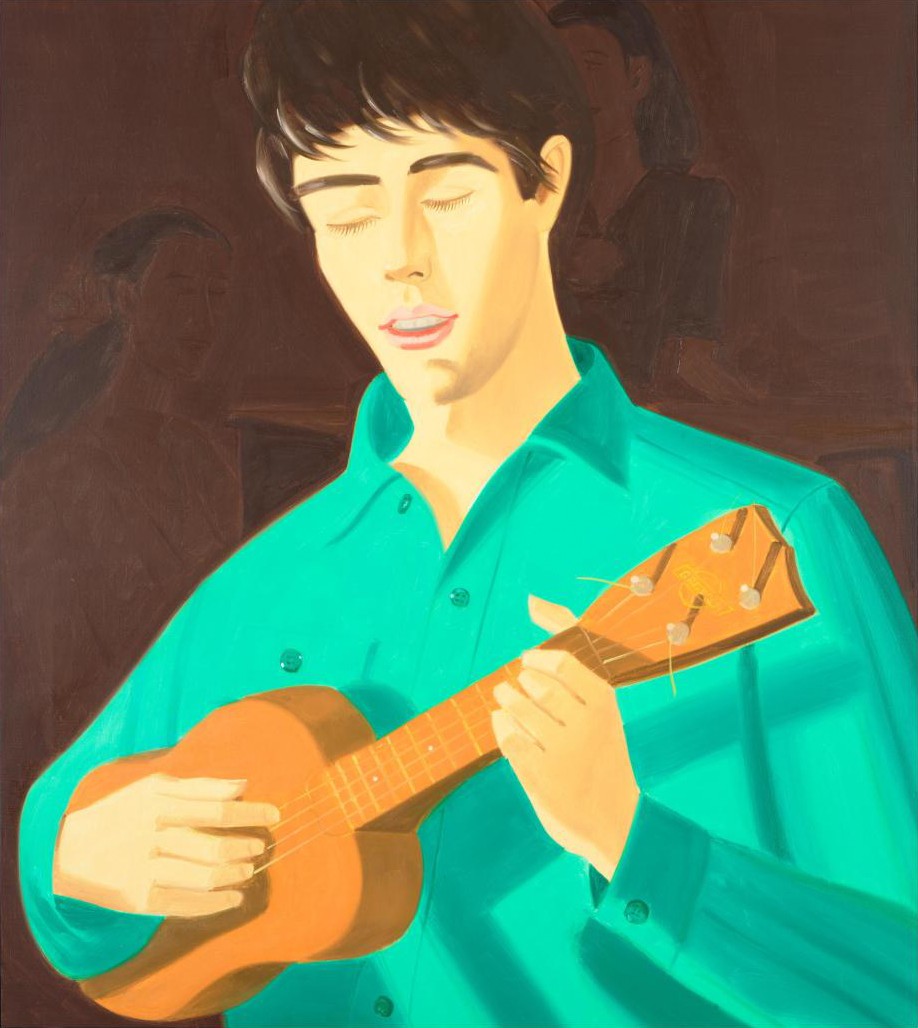 Photograph by Gillian Laub for The New Yorker

Sometimes it takes me days or weeks to get something clear in my head on what I want to do. Everything is in steps. One thing leads to another. 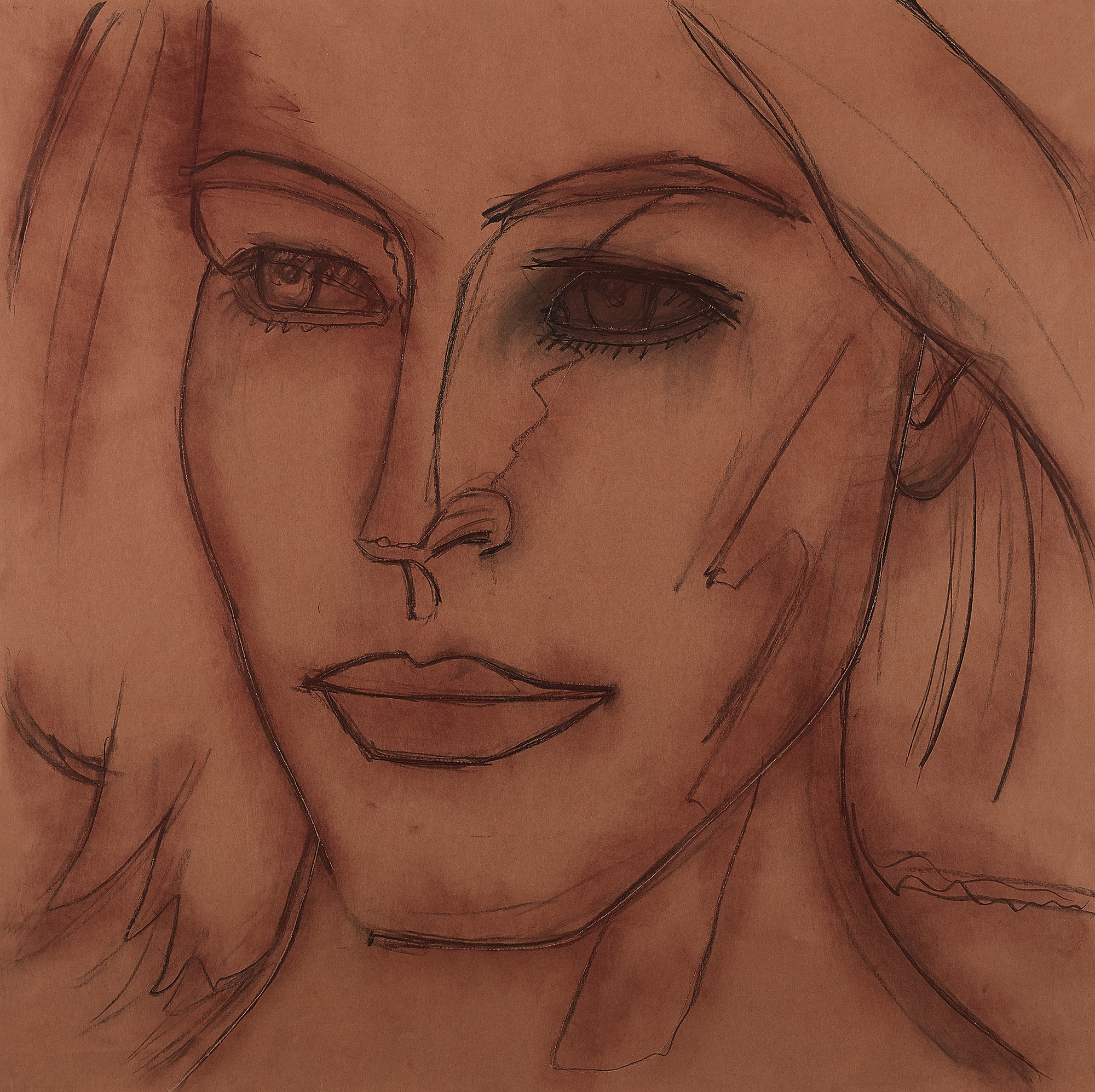 Katz has been painting landscapes since his first solo exhibition in 1954. His landscapes are immersive, contemplative paintings that prompt conversations about the confluence of perception and awareness and the relationship between art and nature. 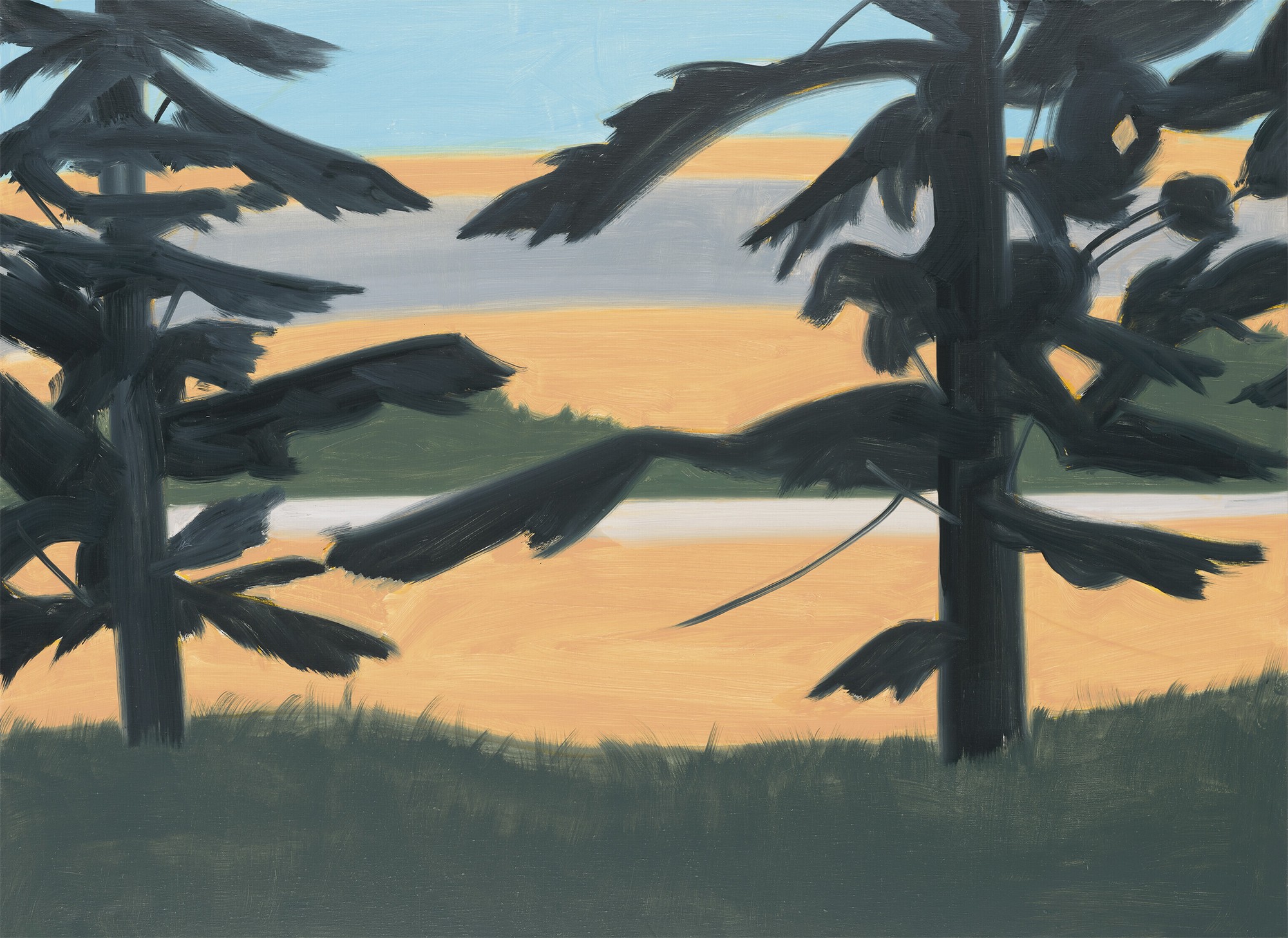 Sunset 2 depicts the light effects of sunset through two trees near a rural lake. Composed of thick, painterly strokes and nebulous forms, this painting is devoid of the hard edges for which Katz is best known. Unlike his human subjects, the forms of nature are softened and blurred into the environments surrounding them. 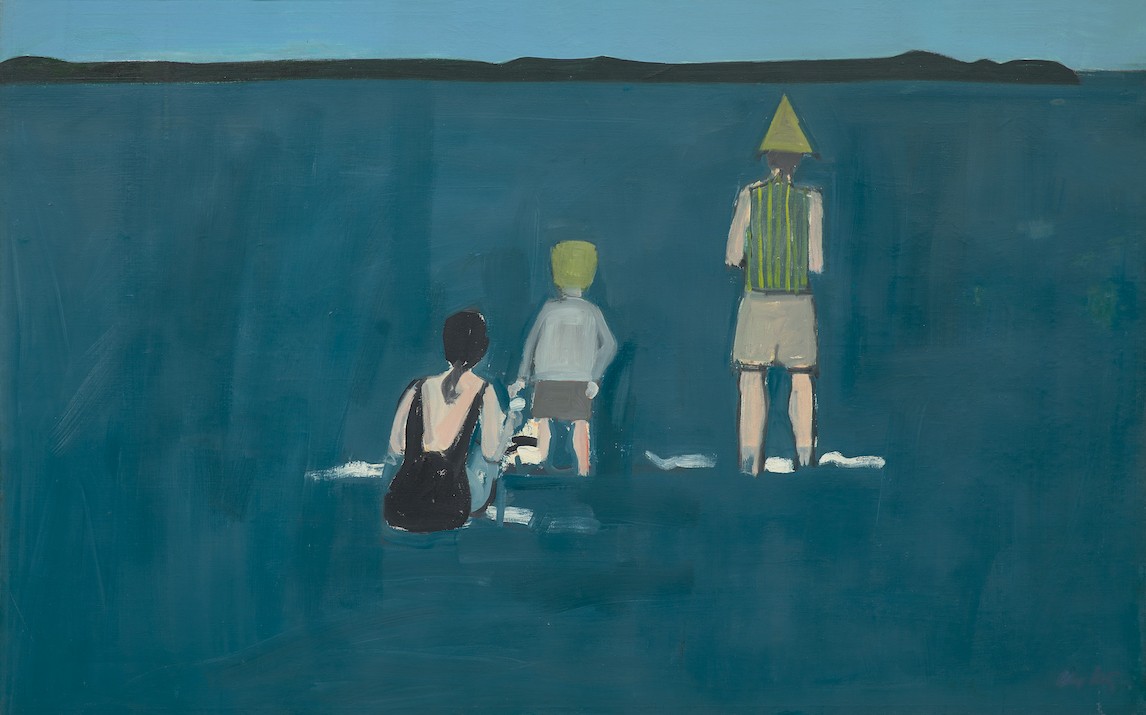 An office in Alex Katz's studio, filled with photos of his family. Photograph by Gillian Laub for The New Yorker 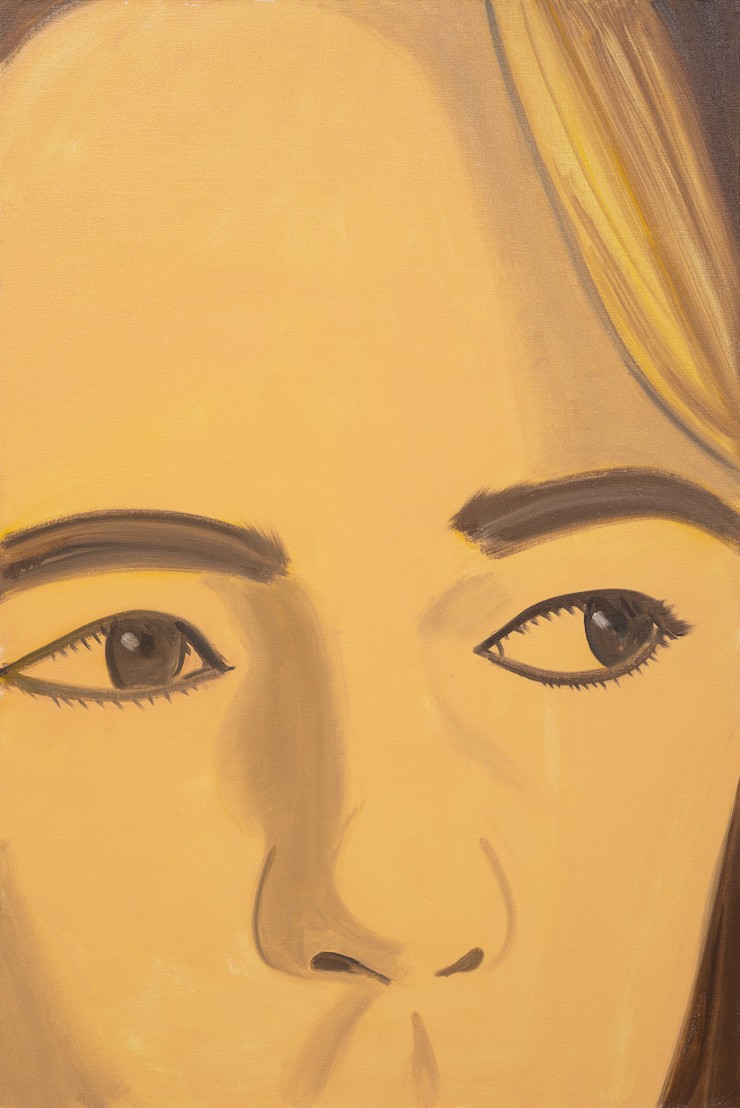 Realist painting has to do with leaving out a lot of detail. I think my painting can be a little shocking in all that it leaves out. But what happens is that the mind fills in what's missing… Painting in a way of making you see what I saw. 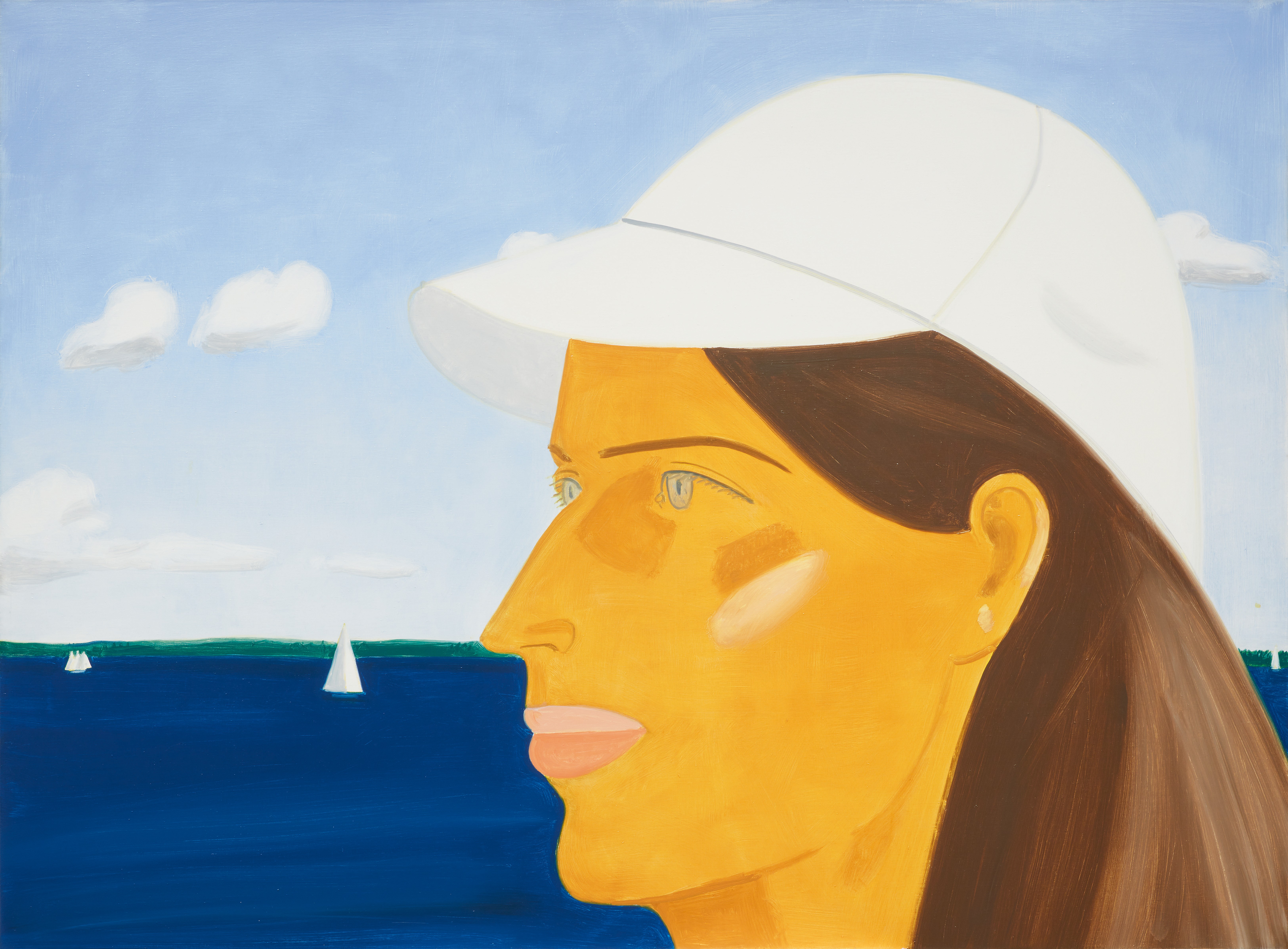 Portraits are one of the great themes in the work of Alex Katz. With his signature approach and style, he transforms the circle of his family, friends, and New York socialites into unforgettable icons. His works are characterized by their flatness of color and form, their economy of line, and their cool yet seductive emotional distance.

9 Cutouts from shaped powder-coated aluminum, printed the same on each side with UV cured archival inks, clear coated, and mounted to stainless steel base.

This work can be acquired as a whole (9 works) or separately.

Black Dress
9 Cutouts from shaped powder-coated aluminum, printed the same on each side with UV cured archival inks, clear coated, and mounted to stainless steel base.
Enquire 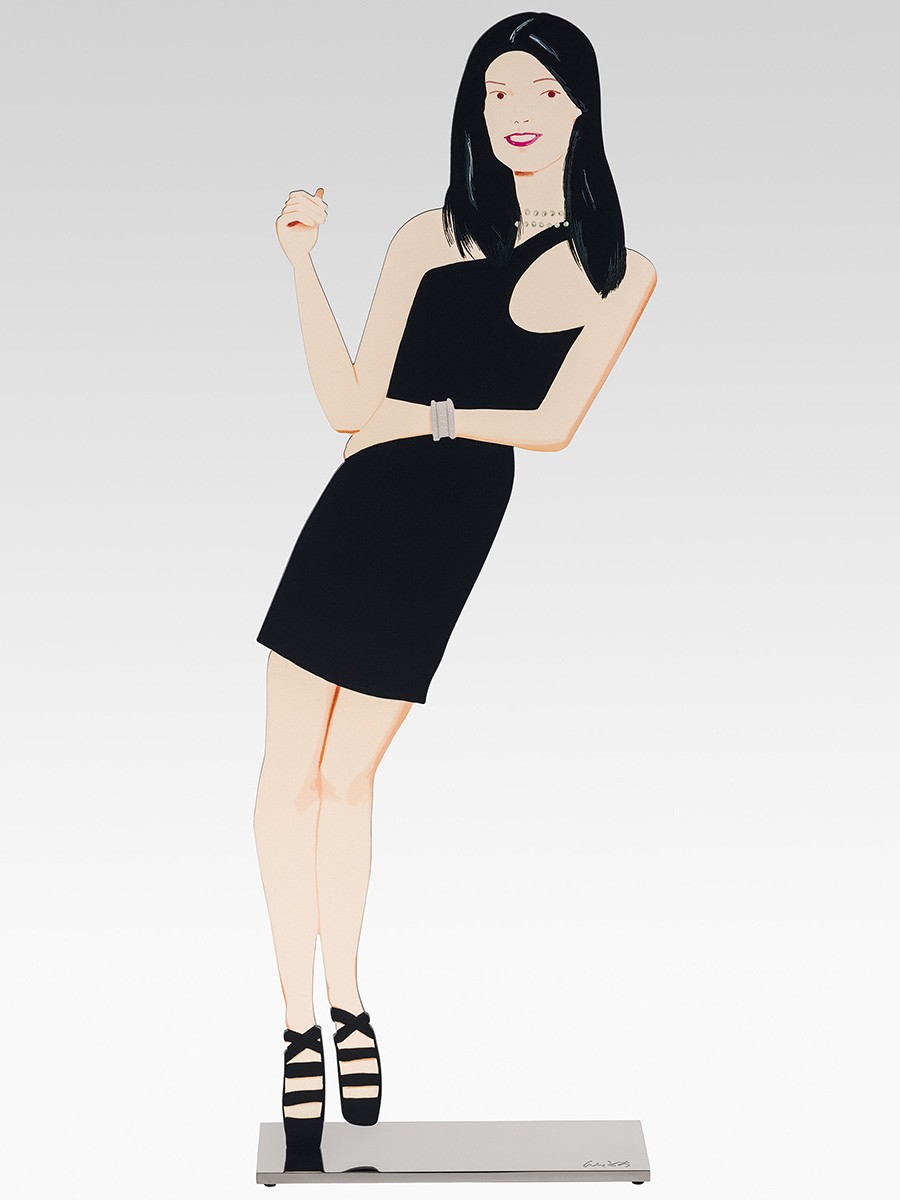 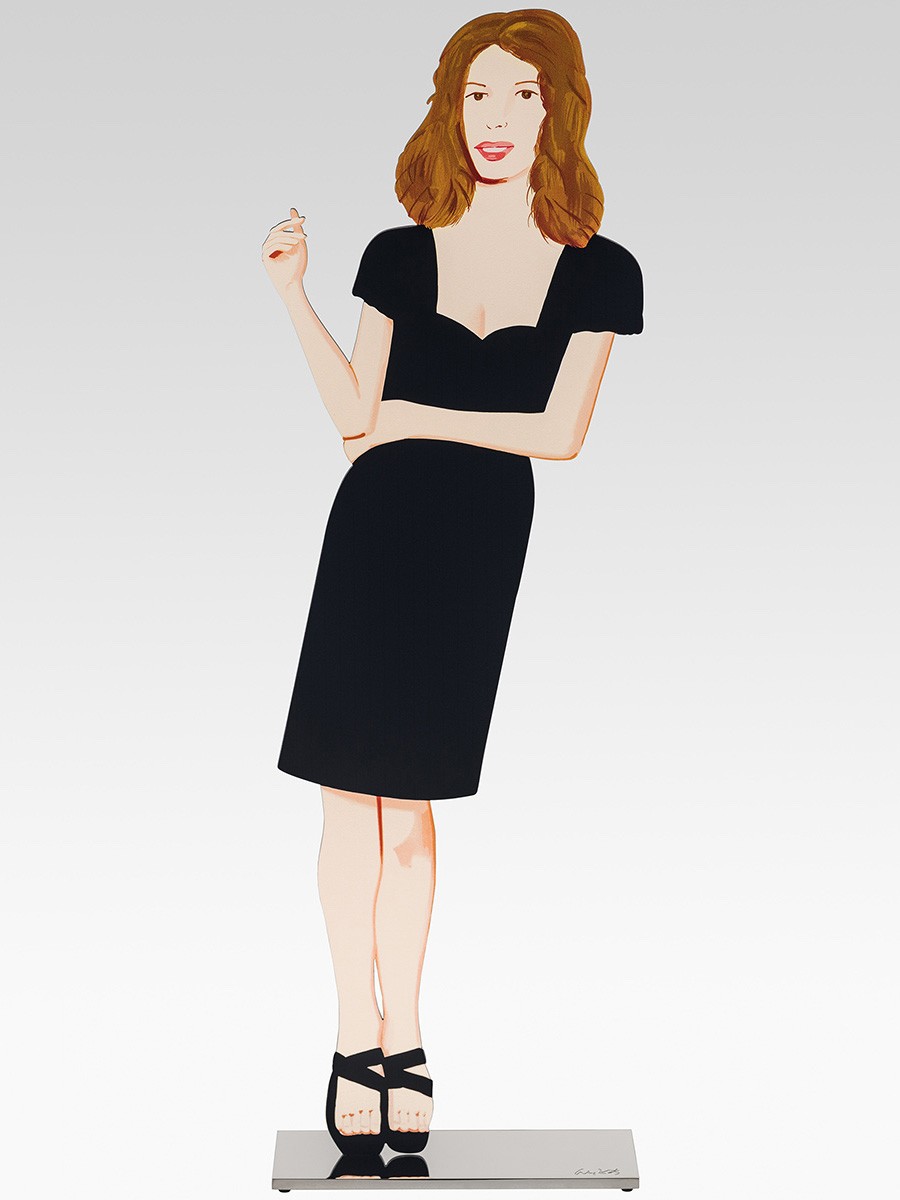 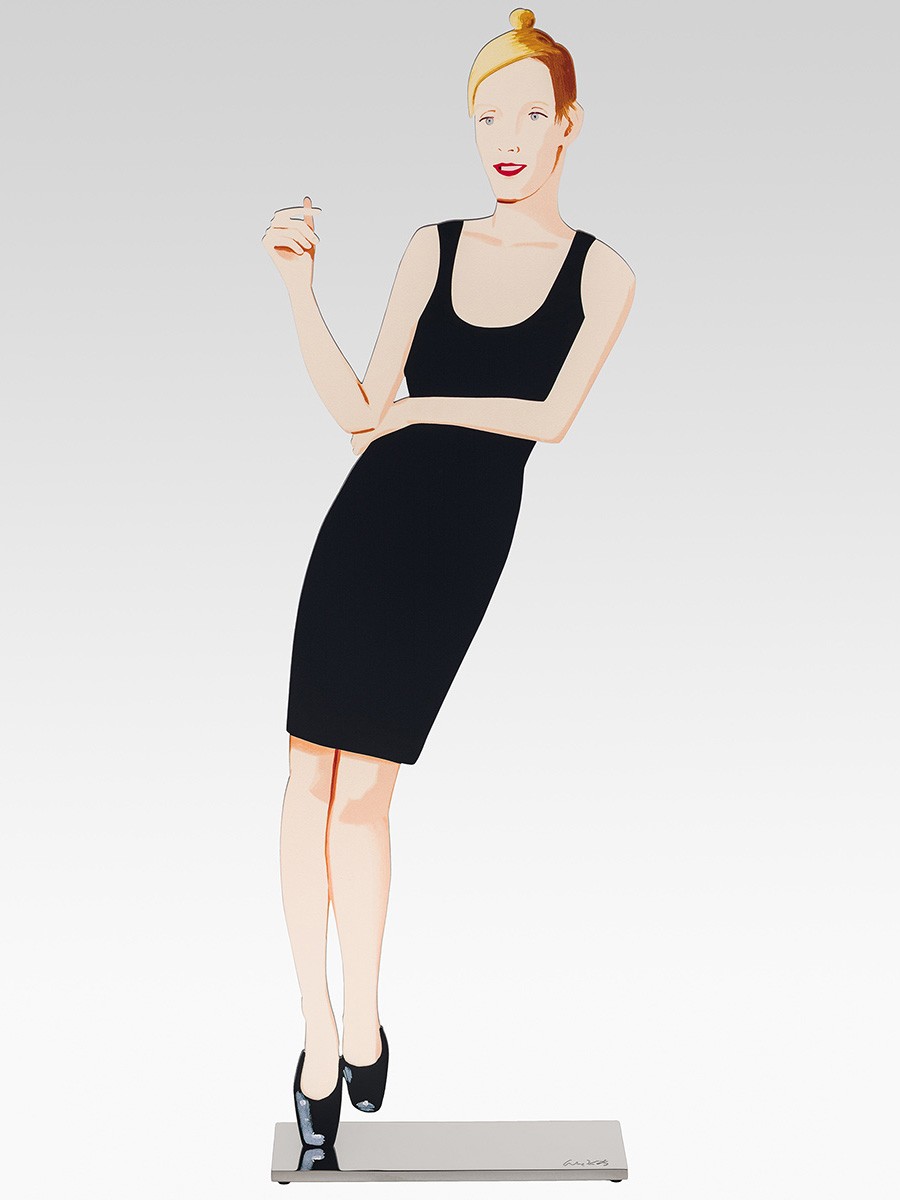 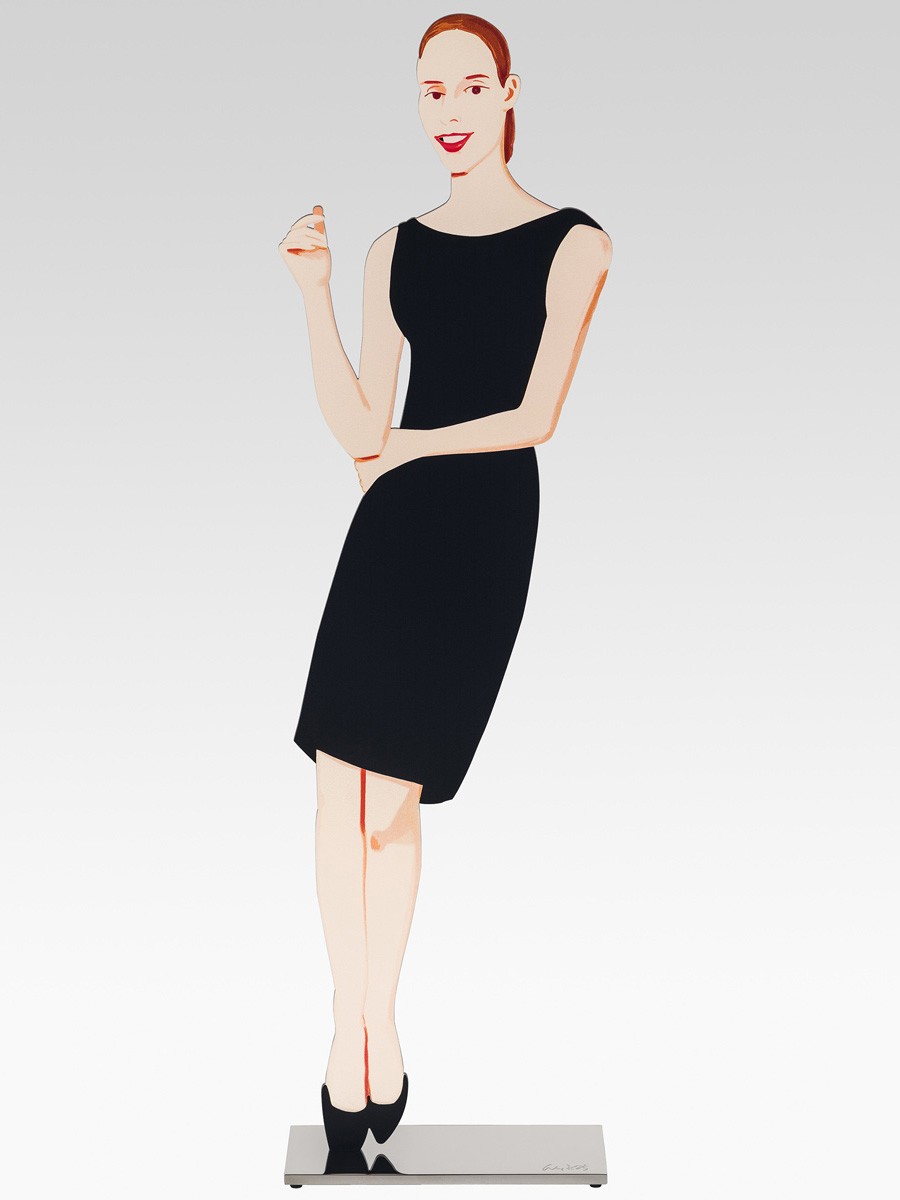 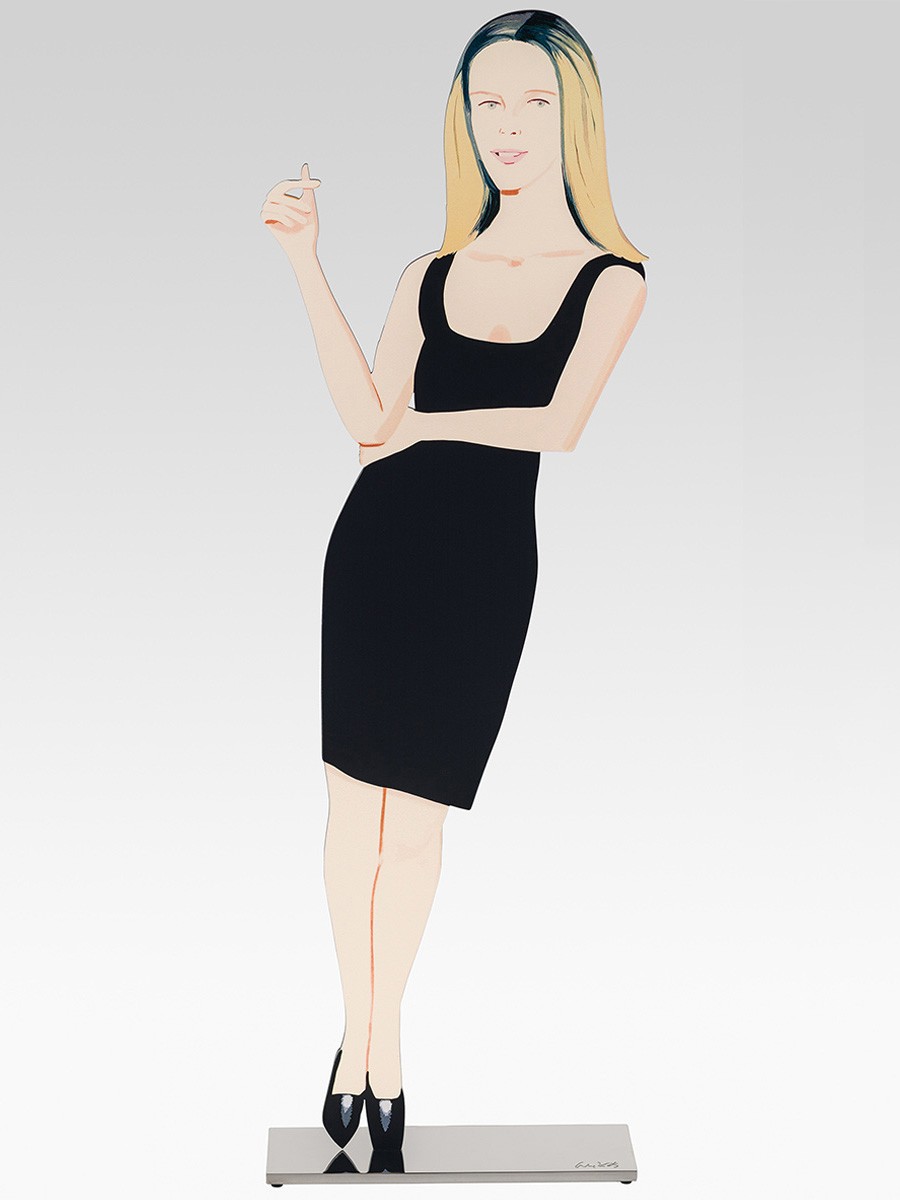 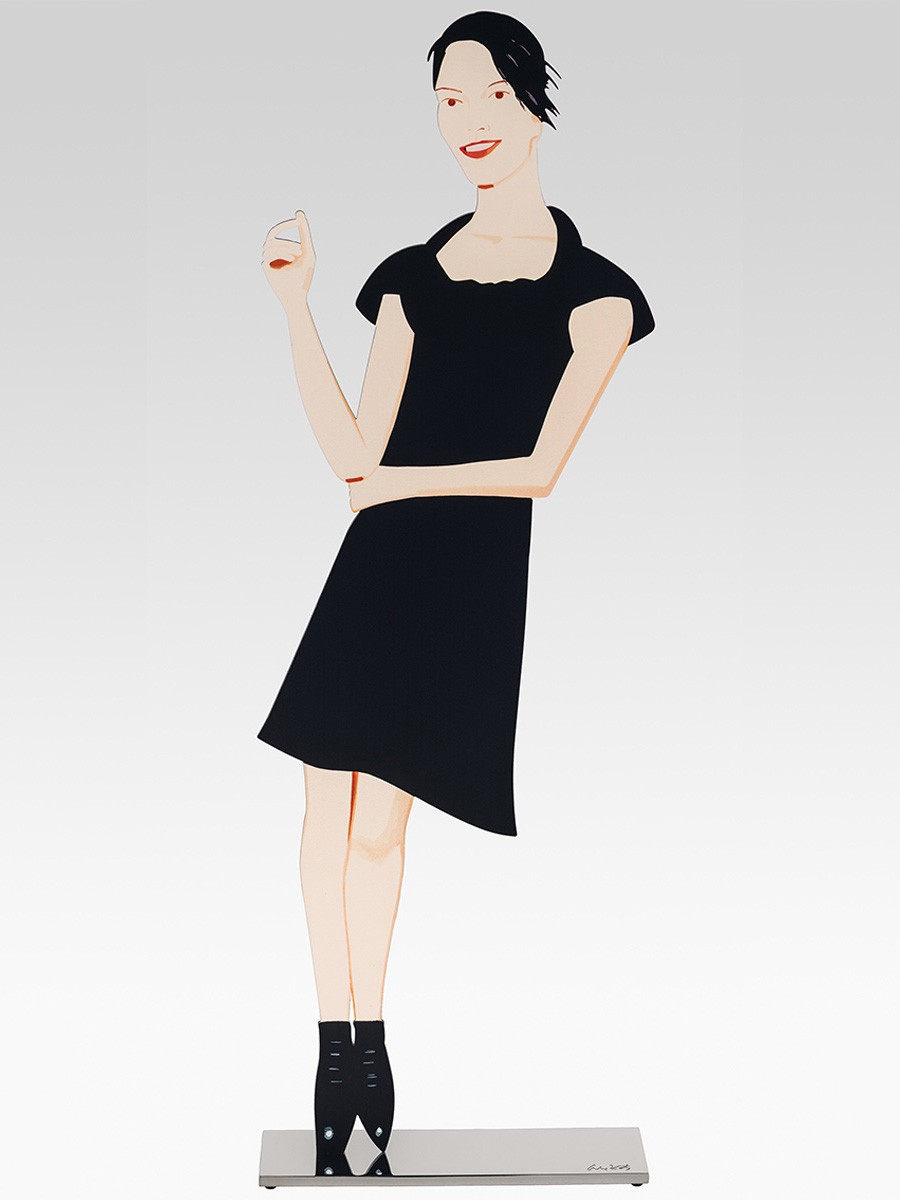 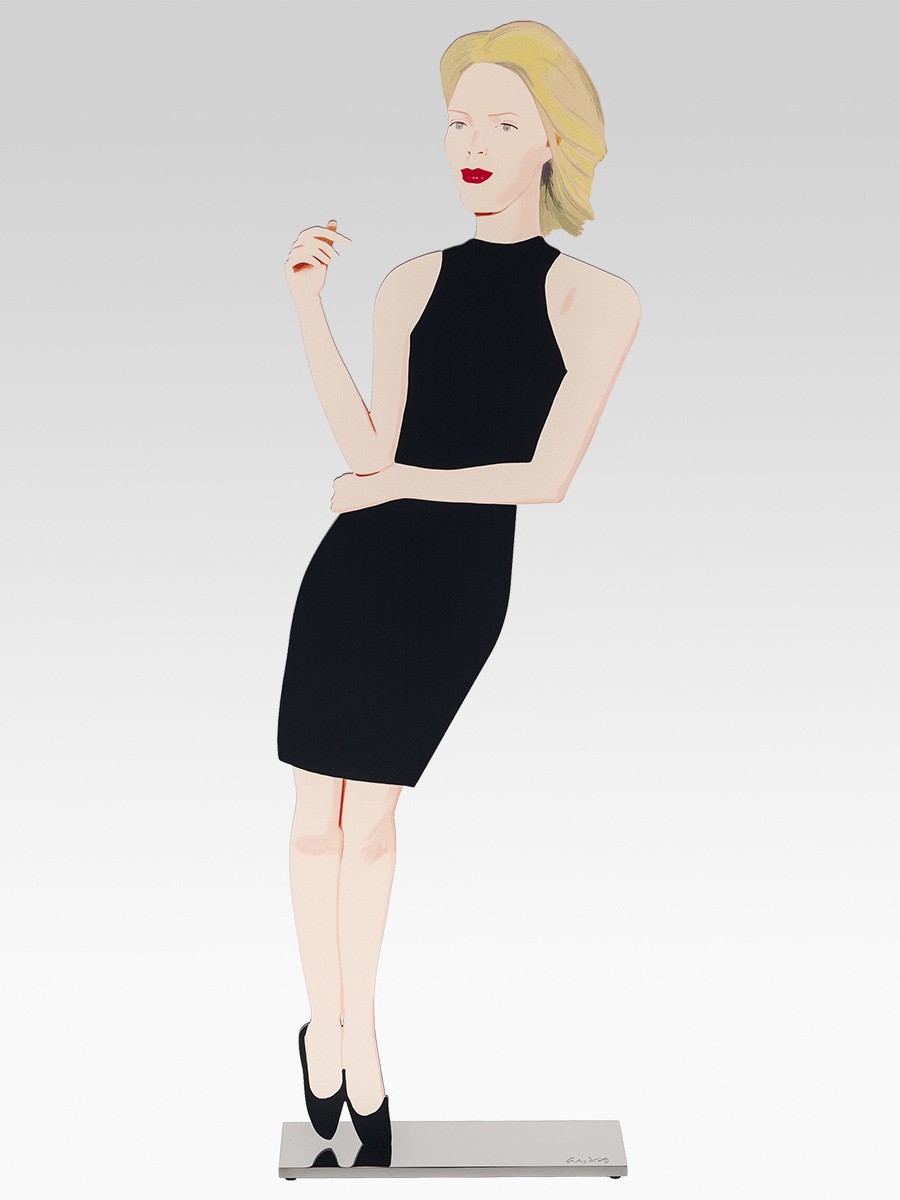 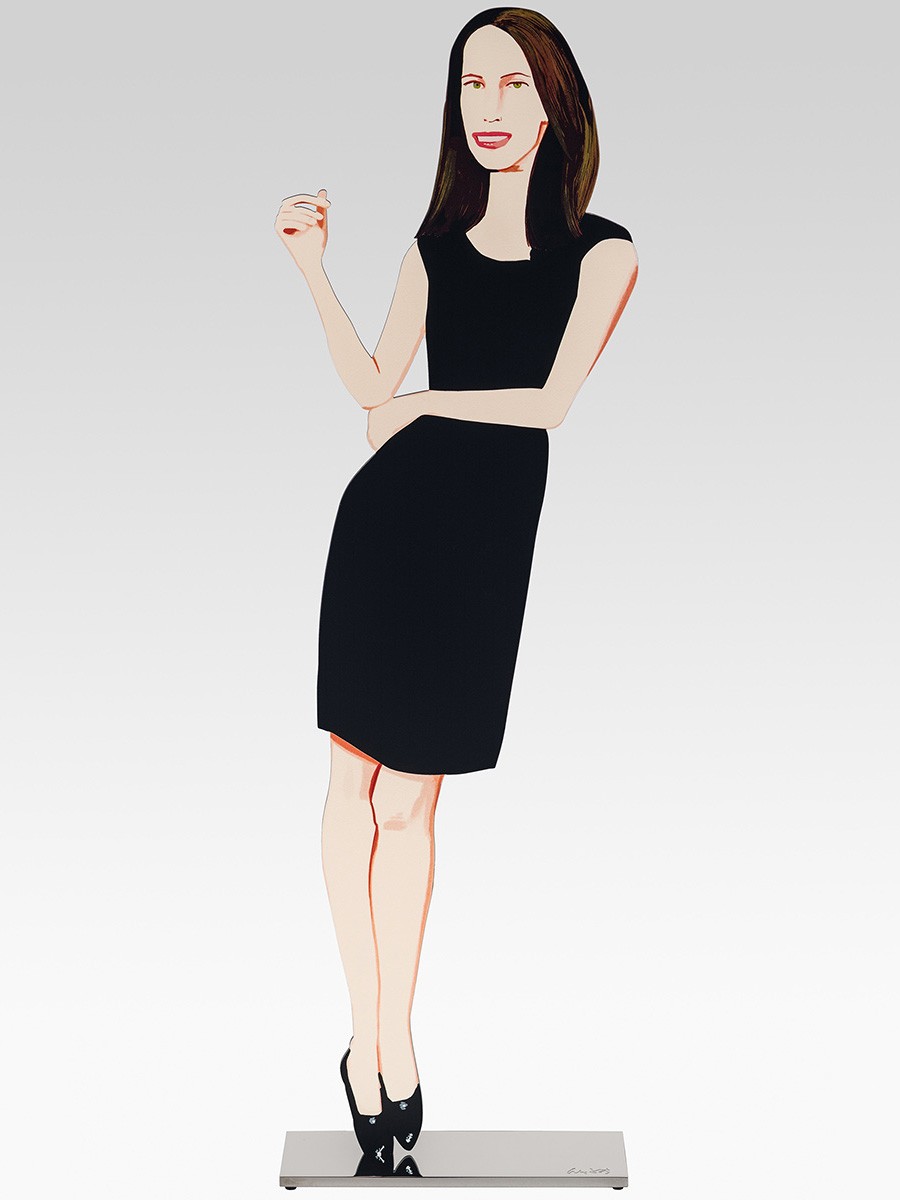 Katz's cutouts, a body of work the artist has explored for over half a century, represent the fullest expression of his strategy. Figures become schematic, simplified forms, freezing moments experienced in present tense into an oblique and near-abstract timelessness.

Alex Katz takes a break in his Manhattan work space amid recently completed canvases, including a first-ever “double portrait,” as he calls it.

An iconic figure of the 20th century New York scene, Alex Katz is an American artist who was born in Brooklyn, New York, in 1927. After graduating from the Cooper Union Art School in Manhattan in 1949, he was awarded a scholarship by the Skowhegan School of Painting and Sculpture in Maine. He lives and works between New York city and Lincolnville (Maine).


Often associated with the Pop Art movement, Katz began exhibiting his work in 1954, and since that time he has produced a celebrated body of work that includes paintings, drawings, sculpture, and prints. His earliest work took inspiration from various aspects of mid-century American culture and society, including television, film, and advertising, and over the past five and a half decades he has established himself as a preeminent painter of modern life, whose distinctive portraits and lyrical landscapes bear a flattened surface and consistent economy of line. Katz's flattening of forms, simplification of detail, and alla-prima paint application, are trademarks of his work.


Since the 1950s, Alex Katz's work has been the subject of more than 200 solo exhibitions and nearly 500 group exhibitions around the world. His work can be found in nearly 100 public collections worldwide, including the Art Institute of Chicago; the Hirshhorn Museum and Sculpture Garden at the Smithsonian Institution, Washington, DC; the Metropolitan Museum of Art, New York; Centre Georges Pompidou, Paris; Museo Nacional Centro de Arte Reina Sofía, Madrid; the Museum of Fine Arts, Boston; the Museum of Modern Art, New York; the National Gallery of Art, Washington, DC; the National Museum of American Art, Smithsonian Institute, Washington, DC; the Philadelphia Museum of Art; The Tate Gallery, London; and the Whitney Museum of American Art, New York, among many others. A retrospective of his work is being held at the Guggenheim Museum in New York until February 2023.