Pearls to the Peachy Fire

‘Pearls to the Peachy Fire’ is the latest collection of paintings by the acclaimed British artist, David Kim Whittaker, made specifically for this, his first solo exhibition in the principality of Monaco.

Whittaker’s works are ‘born’ into families, reflecting the kaleidoscopic mind of the artist as he attempts to make sense of a kaleidoscopic world, and our kaleidoscopic existence within it. Whittaker’s approach in general could be seen as a poetic form of psychological collage, where the world and our collective experience is torn apart and reassembled. The resultant images, often resembling a head-like form, become powerful sentinels for all mankind.

Whittaker is an artist who fully inhabits his unique vision. Words and images collide within his mind, transposed upon the walls of the studio and then on to each work surface and from there rebound out into the world. ‘Pearls to the Peachy Fire’ is a title that came to the artist in his sleep. The words followed a dream in which he received a vision of the houses of parliament burning, days later Whittaker recalls the crushing images of Notre-Dame ablaze. All things feed in. “Each of our lives is a pearl” Whittaker says.

Artists are often heralded for their sensitivity, somehow with Whittaker this claim would be an emphatic understatement. Upon meeting him it is clear that the weight of the world is not only on his shoulders but weaving through the very fabric of his being. However, Whittaker is not someone who buckles easily, and lives life with a profoundly gentle and alarmingly humble resilience, which is focused single mindedly upon his calling, to make his art. He calls his paintings ‘survivors’, a characteristic shared by their author.

Half of ‘Pearls to the Peachy Fire' is representative of Whittaker at his most potent and universal as he approaches challenging subjects, far and wide, ranging from the alleged Russian poisonings in Salisbury England, to civil unrest on the streets of Paris, violent far right oppression in Brazil, the continued plight of those displaced in war torn Syria and the fallout from his home country's split by the Brexit pantomime. Yet set within the maelstrom that ensues and engulfs, the cameo is set, as a romantic portal which offers hope and a sense of human potential beyond the temporary suffering, for these are paintings about our capacity to triumph over adversity.

In addition to the, often painstaking, works on canvas and panel, there are also a suite of smaller works on paper, which Whittaker credits as hugely important to his process. These pieces made with makeup, pencil and collage, have the delicacy of a spider weaving its web, beautiful but still an intricate trap in which to catch a fly.

Set within this publication are some of David’s writings, a private process which has become increasingly important and expresses something of the way in which the artist processes the world around and within. These profound sensory verses transport us at once within the horrors of the First World War, and then to echoing trauma in the Middle East. One particular piece is written in response to noticing, and then joining the hoards to walk on by, a homeless girl in the streets of New York City, except with Whittaker there is never a walking on by - as the girl becomes a vision who will no doubt echo an eternity. Another note becomes a love letter, written not to another, but to his oil paint, expressing the artists everlasting love, for giving him his voice. Another tells a tale of loss for a beloved Mother who may be gone but will never be forgotten.

The exhibition also offers Whittaker at his most personal. ‘The Waiting Man’ is a series of small works, which appear as a male phantom, patiently awaiting a transition of some sort, like a lion awaits its prey. Three monumental canvases share an overarching title of ‘The Privy’ resembling figures in a partly romanticised yet simultaneously grubby bathroom setting, in an amorphous state of private revelation. The sub-titles, ‘To Look in the Mirror’, ‘Souls for Gods and Surgeons’ and ‘The Weeping Nude’ make undoubted reference to the artist's personal journey with gender identity.

The theme of self-portraiture continues with the ‘Molecular Mirror’ paintings. Reveling in ‘The beautiful in between’, a state which expresses the artist's condition but offers an apt expression of how Whittaker views ‘the existence’ as a whole. Perhaps the artist's vision of self is completed by the colossal triptych ‘Manola Performs Tonight (A Life Time of Not Really Knowing Until the End)’. A complex work where the repeating cameo first depicts the Industrial Revolution which precedes apocalyptic deforestation as ape battles machine in the centre panel and culminates in the last panel with visions of the burning tower of Notre-Dame as hundreds of years of civilisation are quickly turned to dust. Within the centre of each panel, Manola, a burlesque, vampiric vision appears, putting on a show for her audience on a stage or putting on her makeup in the bathroom mirror? Transcending the primal horror of it all and taking flight or decadently luxuriating in the complex circus of life. Yes, this is David Kim Whittaker, perhaps there is not one answer to be drawn from all this, after all, we live in a world where anything goes. Until it is gone. 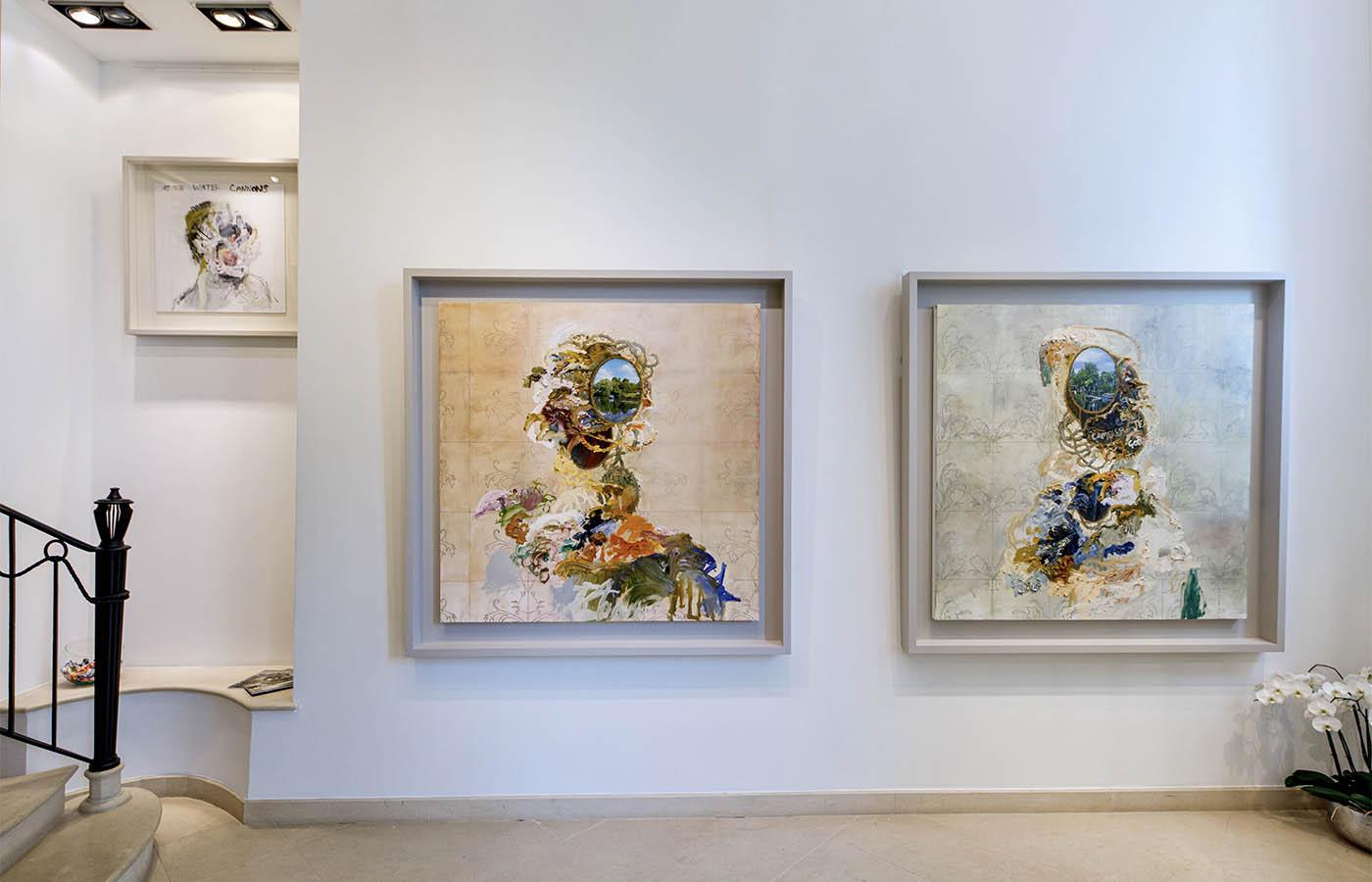 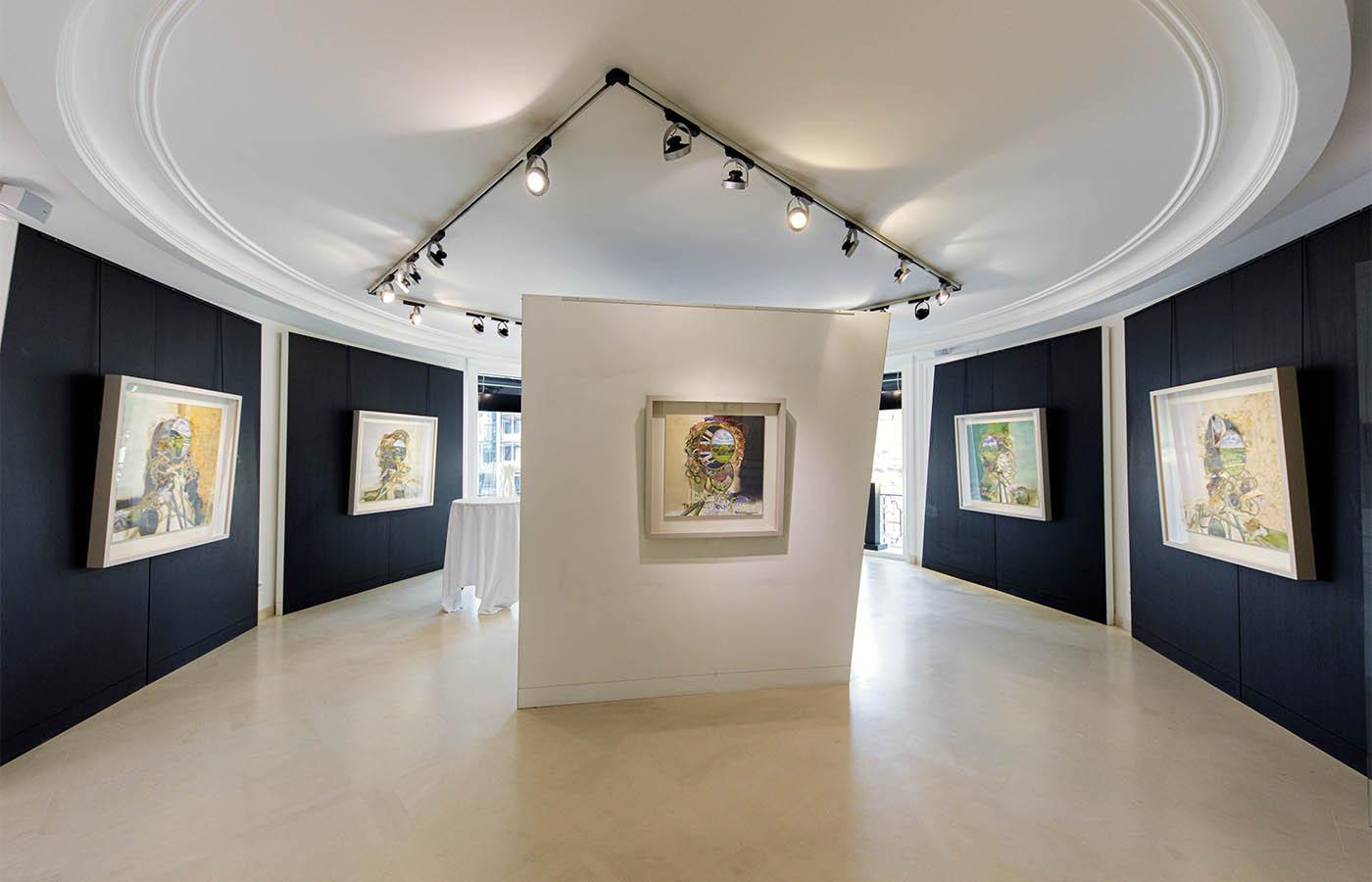 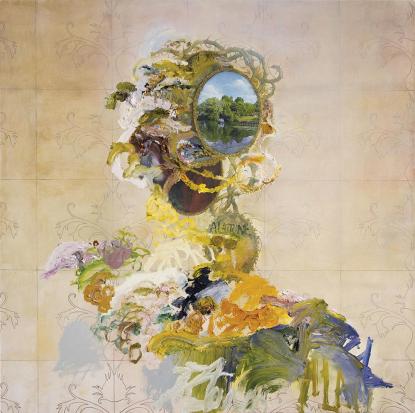 David Kim Whittaker, The Privy (To Look In The Mirror), 2019

Oil and acrylic on primed canvas 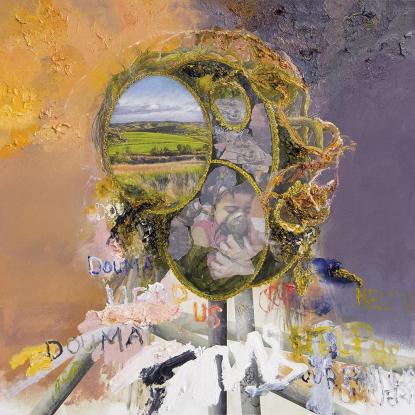