René Magritte was a Belgian artist and one of the most enduringly influential members of the Surrealist movement. Best known for his illusionistic images that challenged the viewer’s preconceptions of reality, Magritte’s Surrealist paintings are clever, witty, and ironic.

Born on November 21, 1898 in Lessines, Belgium, the artist went on to study at the Académie Royale des Beaux-Arts in Brussels. His interest in avant-garde art was piqued after seeing a photograph of Giorgio de Chirico’s The Song of Love (1914), De Chirico, along with Max Ernst, served as major influences on the young Magritte. During the late 1920s, while maintaining an active commercial illustration career in Paris, he became involved with Surrealism, collaborating with André Breton, Man Ray, Yves Tanguy, and Paul Éluard. Worldwide interest in his work sparked in the 1960s with numerous museum exhibitions. The artist died during the height of his popularity in Brussels, Belgium on August 15, 1967.

Today, his works are held in the collections of The Museum of Modern Art in New York, the National Gallery of Art in Washington, D.C., the Musée Magritte Museum in Brussels, and the Tate Gallery in London. 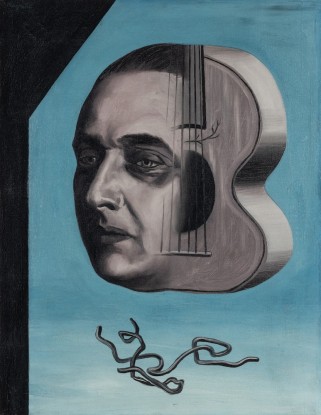