Marc Chagall was born in 1887, in Vitebsk, in the Russian Empire and grew up among a devout Jewish community. His faith greatly inspired his art and themes of Jewish symbolism were frequently featured in his works. After learning the elements of drawing at a local school and studying painting in St. Petersburg, he moved to Paris in 1910, where he quickly immersed himself in avant-garde art circles. The development of the artist's career and the vagaries of two World Wars forced him to move repeatedly between France, Germany and Russia while also spending time in the United States. He finally settled in Vence, France in 1948, where he passed in 1985.

Marc Chagall's masterful, evocative works are characterized by their poetic, mystical qualities, their expressionist perspective, and their use of bold, vivid colour. Rich, complex and layered, Chagall's colour floats like chromatic mists across the surface of his work. Chagall's style has been associated with the art movements of surrealism, fauvism, and cubism but instead of fitting neatly into one category, he created a style uniquely his own, consisting of expressively rendered representation in imaginative, even magical compositions with people, animals and objects often defying gravity and logic.

Over his career, Chagall fulfilled countless important public and private commissions: stained-glass windows (for example in Metz, Reims, Jerusalem, the UN HQ in New York, Zurich and Mayence), paintings (ceiling of the Opéra National de Paris, painted murals in the New York Metropolitan Opera), mosaics (e.g. The Four Seasons, 1974, Chicago) tapestries (for example the Gobelins tapestries he wove for the Knesset – Israeli Parliament) and stage work (set design and costumes for Daphnis et Chloé at the Opéra National de Paris). He also produced a great many lithographs and engravings for illustrations as well as ceramics. In 1973, the Marc Chagall National Museum was inaugurated in Nice, France. His works have been and continue to be the object of numerous exhibitions and retrospectives worldwide and are part of numerous prestigious public and private collections such as the Guggenheim Museum and the Museum of Modern Art in New York, The Art Institute of Chicago, the Philadelphia Museum of Art, the Louvre museum and the Musée National d'Art Moderne in Paris, just to name a few. 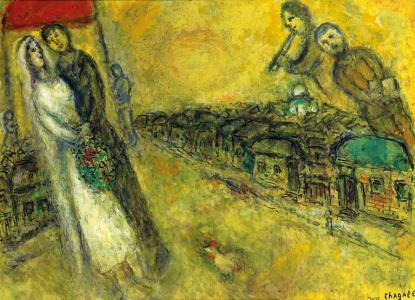 Marc Chagall,  The newlyweds under the canopy, 1980

Oil and gouache on canvas 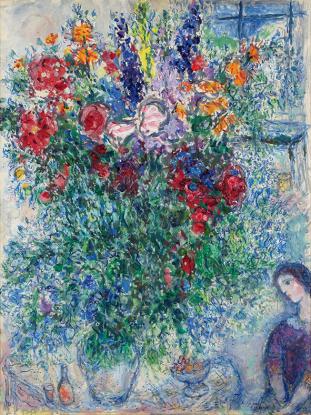 Oil and gouache on canvas 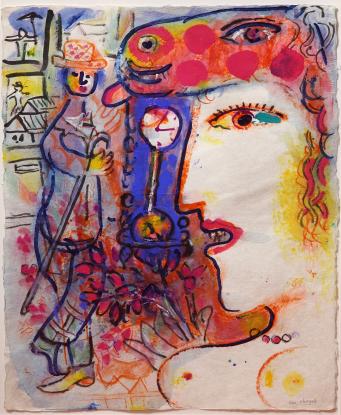 Marc Chagall,  The newlyweds with rooster, 1975

Oil, brush and ink on canvas

Gouache, pastel and charcoal on paper laid down on canvas

Oil and tempera on canvas

Oil and tempera on canvas 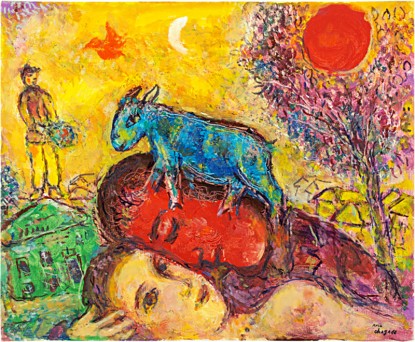 Oil and coloured inks on canvas